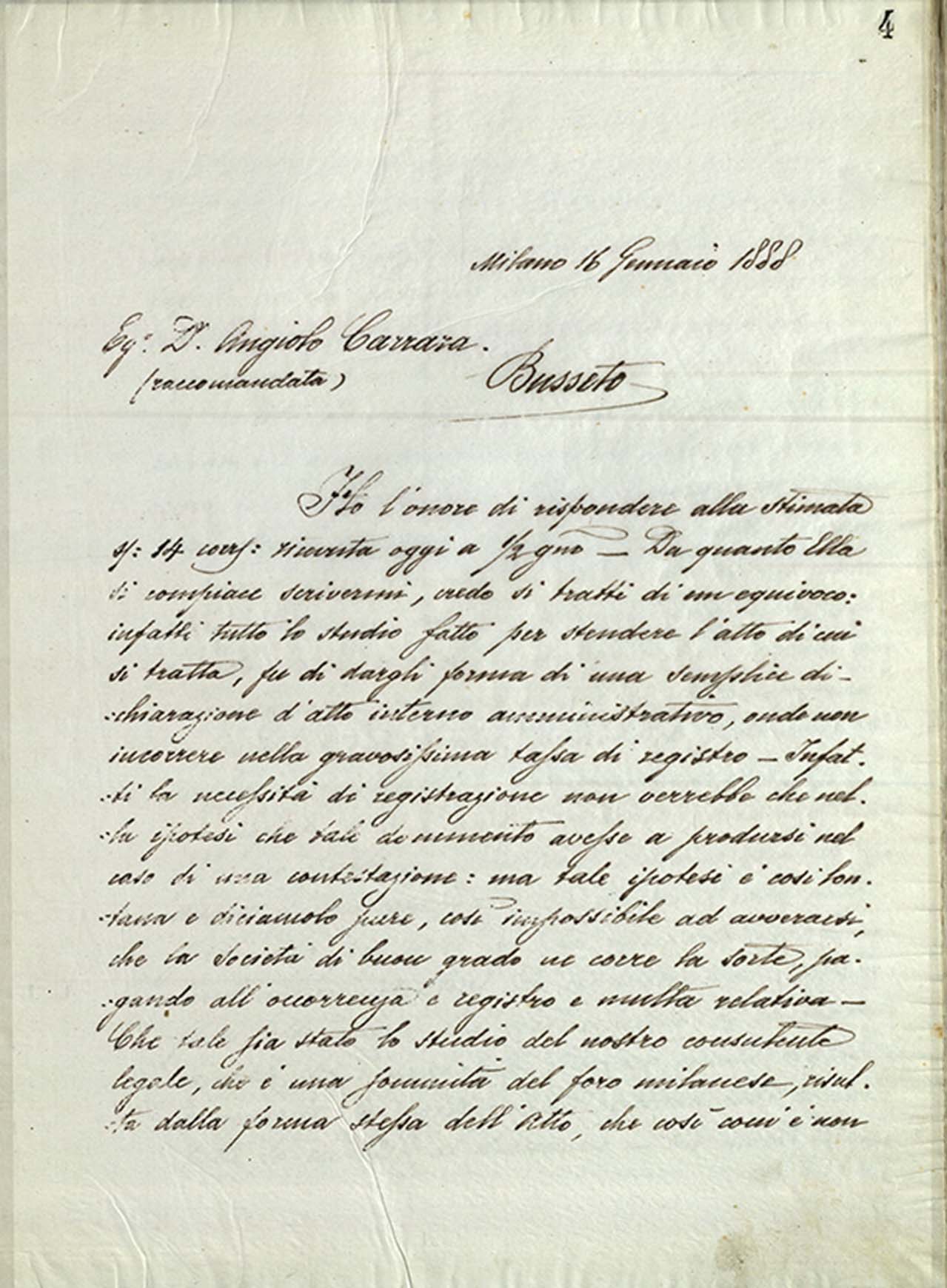 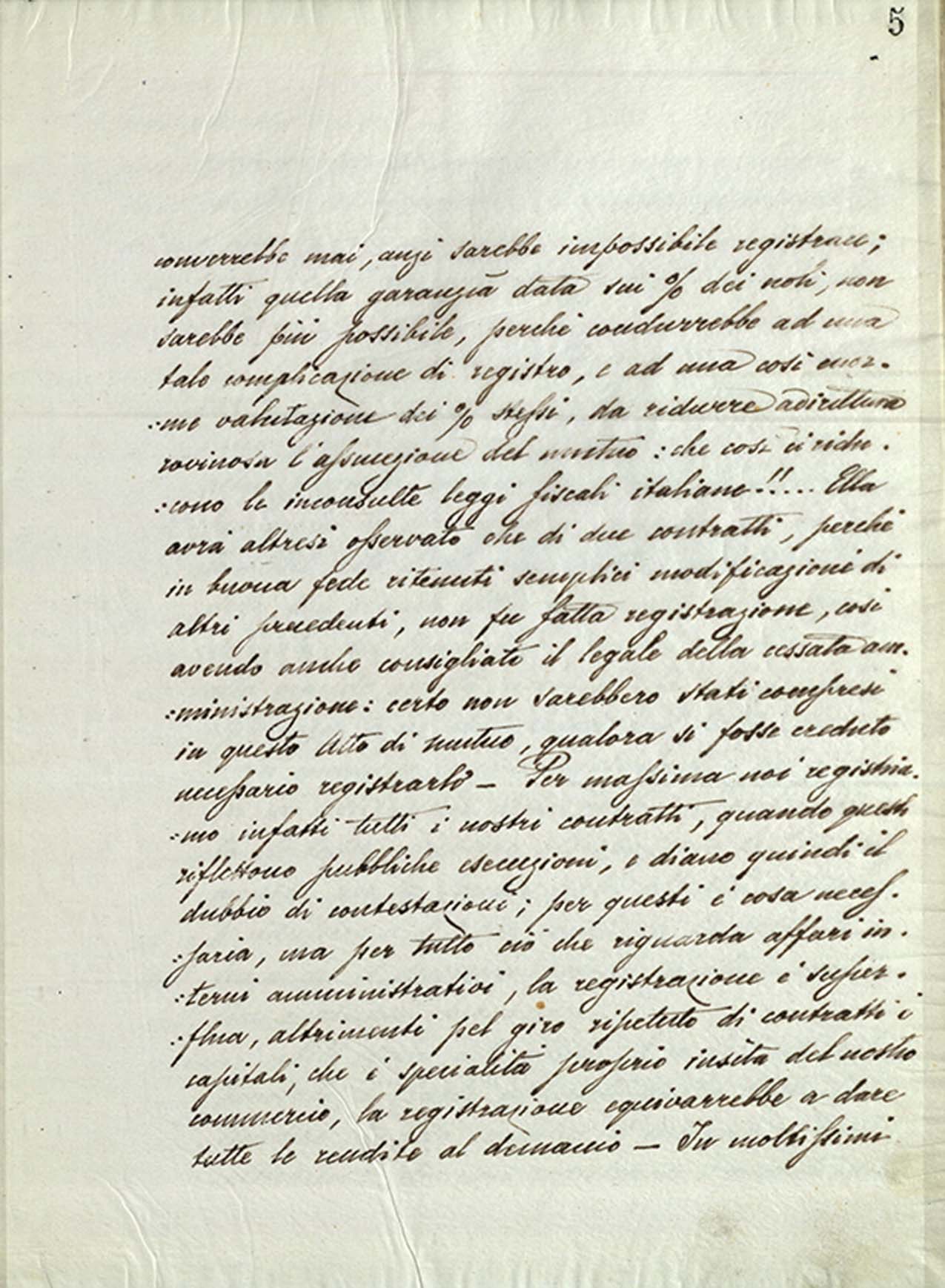 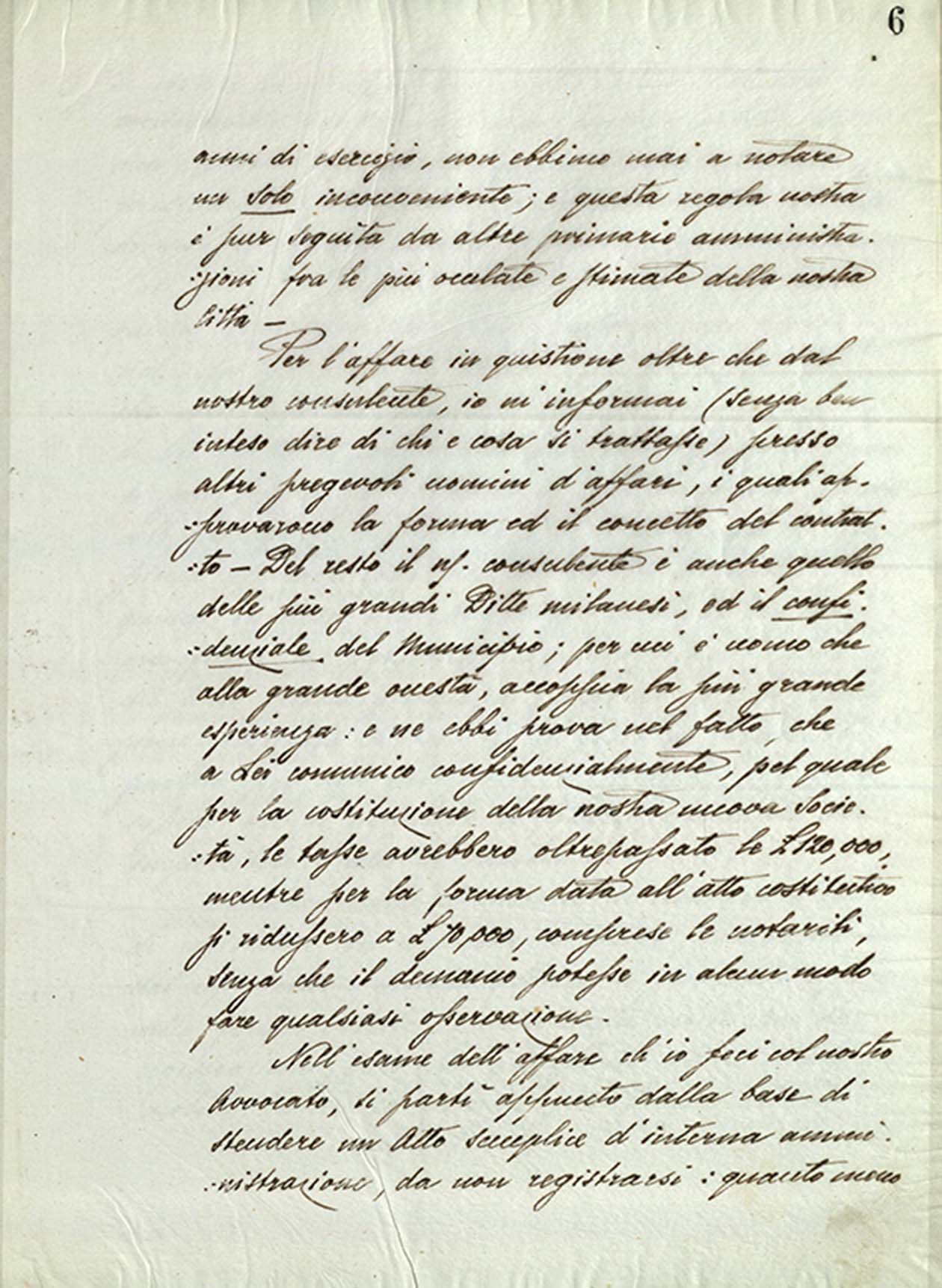 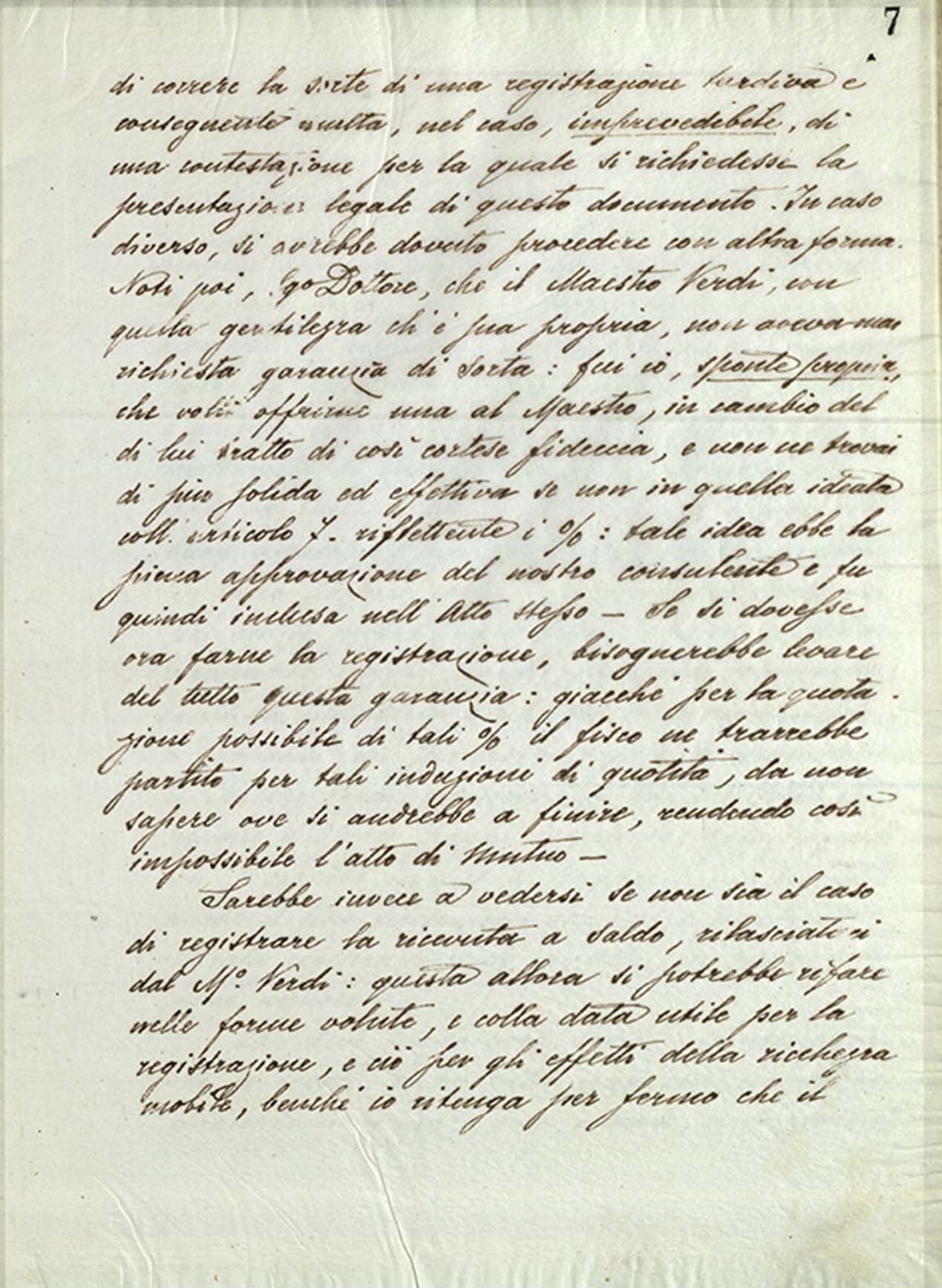 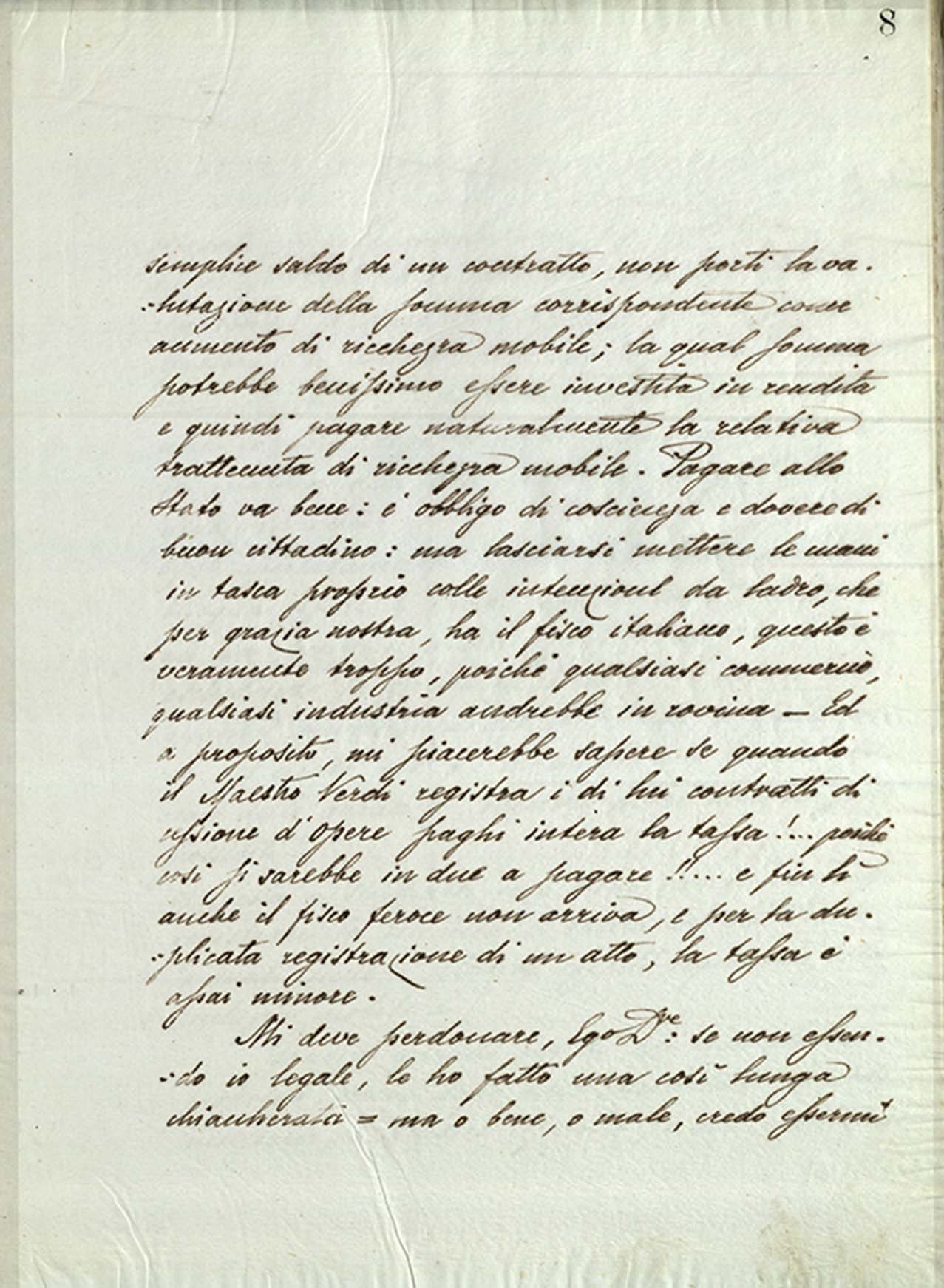 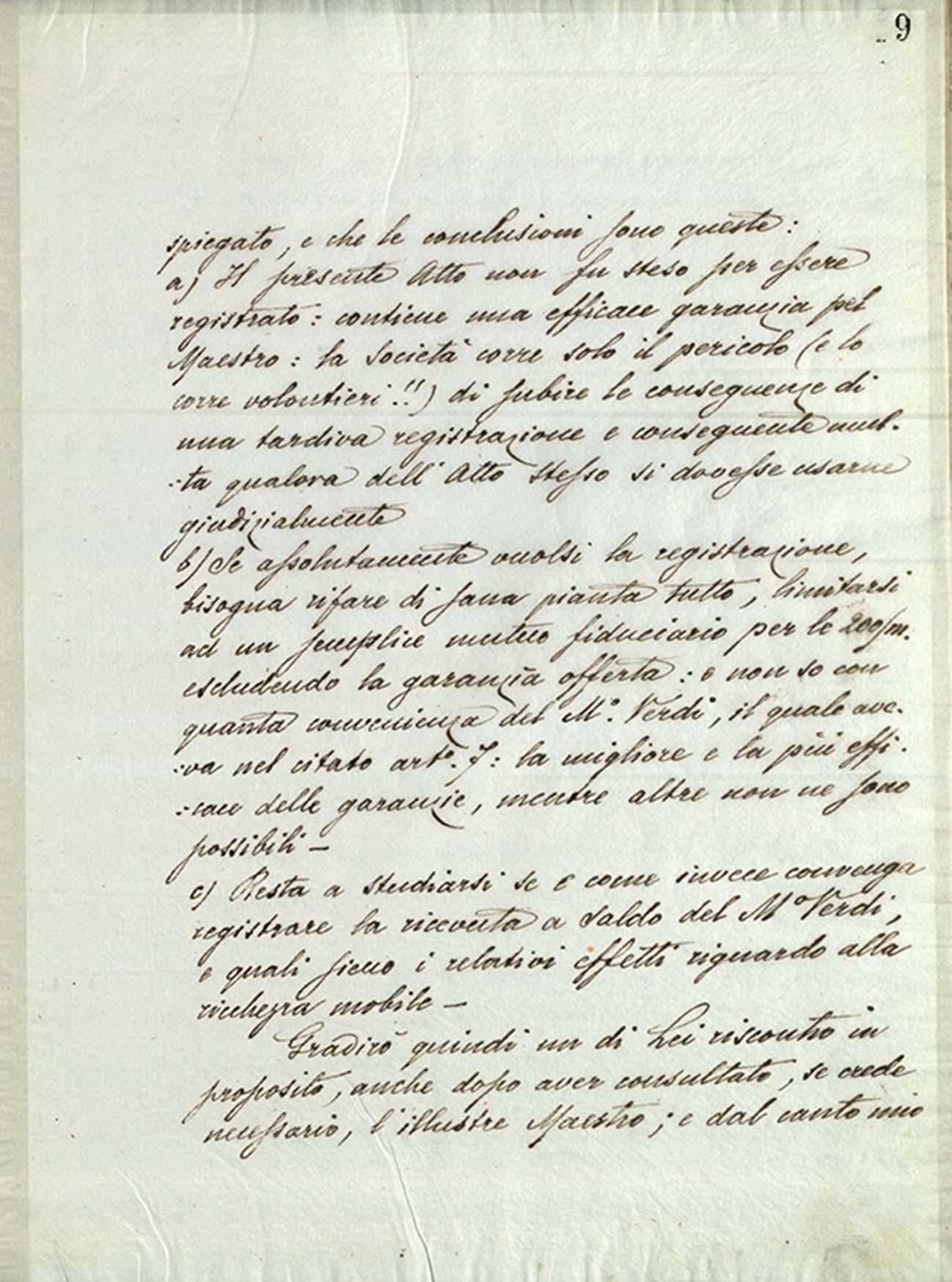 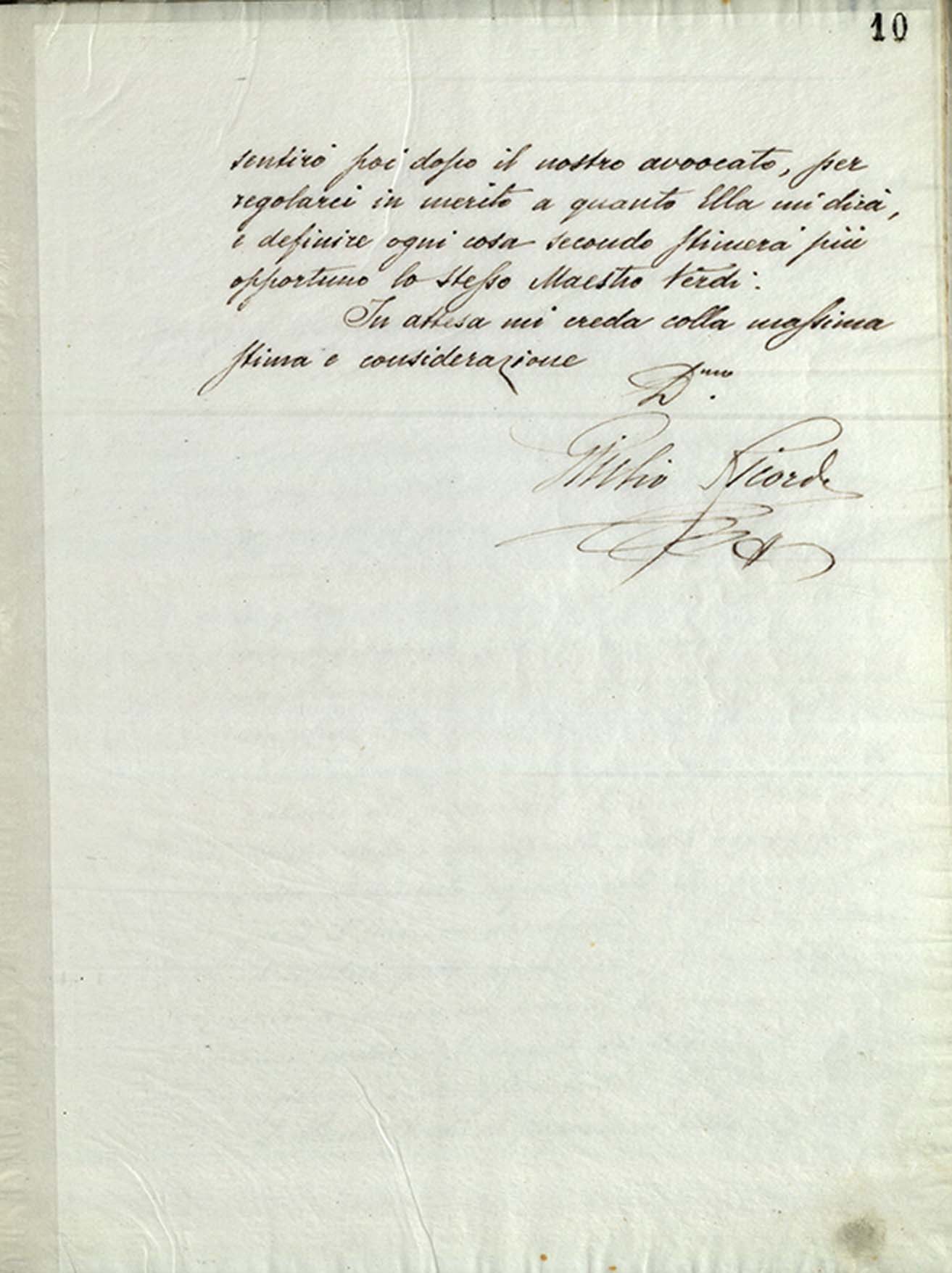 I have the honor of responding to your esteemed , which I received today at noon. From what you have kindly written me, I believe there has been a misunderstanding: in fact, all of the study done to draw up the contract in question, was to give it the form of a simple declaration of an internal administrative procedure, in order to avoid the extremely costly registration tax. In fact, registration would only be necessary in the hypothetical event of a dispute, for which such a document would need to be produced; but such a hypothesis is so remote and, let us just say it, so impossible that it would happen, that the Company is willing to run that risk, paying the registration and relative penalty if eventually required to do so.

The fact that this has been the deliberation of our legal consultant, who is most highly regarded in the court of Milan, can be inferred from the formulation of the act, which as it is would never be advisable, indeed impossible to register; in fact, that guarantee given on the percentages of the rentals would no longer be possible, because it would lead to such a complication in registration, and to such an inflated evaluation of the percentages themselves, that the terms of the contract would be nothing less than ruinous: that’s how we are reduced to having to work with the ill-begotten Italian fiscal laws!!... You will have further observed that two other contracts, because they were considered in good faith to be simple modifications of previous ones, were not registered, as advised by the legal counsel of the liquidated administration: certainly they would not have been included in this financial agreement, should it have been considered necessary to register it. As a rule we register in fact all of our contracts, when these reflect public performances, and therefore involve possible contestations: for these it is necessary, but for all that regards internal administrative affairs, the registration comes later, otherwise the continual stipulation of contracts and movement of capital, which is an inherent characteristic of our commercial activity, would mean that registration would be the equivalent of giving over every bit of income to the government. In many, many years of activity we have never encountered a single contretemps; and this rule of ours is also followed by other important administrations that are among the most prudent and respected of our .

For the affair in question, in addition to , I sought the informed opinion (clearly without specifying the reason for my query) of other reputable businessmen, who approved the form and concept of the contract. As it is, also works for the largest Milanese Companies, and is a for the Municipality; for us he is a man of great honesty combined with enormous experience: and I had proof of this in the fact, which I tell you confidentially, that for the founding of our new Company the taxes would have been more than £120,000, whereas with the form that was given to the founding document they were reduced to £70,000, including notary fees, with no possibility that the government could make any objection.

In the examination of the business transaction that I undertook with our Lawyer, our point of departure was to draw up a simple Act of internal administration, not to be registered: willing to run the risk at worst of a late registration and consequent fine, in the unforeseeable case of a dispute requiring the legal presentation of this document. Otherwise, it would have been necessary to proceed with another form. Note further, Esteemed Doctor, that , with his natural sense of decorum, had never requested any sort of guarantee: it was I, sponte propria [on my own initiative], who wished to offer one to the Maestro, in return for such courteous trust placed in me, and I found nothing more concrete and effective that that represented by article 7 reflecting the percentages: that idea was fully approved by our consultant and was therefore included in the Act itself. If one were now obliged to do the registration, it would be necessary to completely remove this guarantee: since the fiscal authority would be so attentive to the conjectured computation of percentages that one only knows where it would end, therefore rendering the financial agreement impossible.

On the other hand, whether it might be the case to register the receipt of payment signed by M. Verdi bears worth looking into: this then could be done in accordance with required procedures, and with the date useful for the registration, and for the purposes of declared income, even though I firmly maintain that the simple payment due as stated in a contract should not be considered an increase in disposable income: which sum could very well be invested when received and therefore naturally subject to the relative income tax. Rendering what is owed to the State is fine: it is the moral obligation and duty of a good citizen; but letting the State dip its hand into your pocket like a thief, which would be our fate at the hands of the Italian fiscal authority, this is really too much, since any commercial enterprise, any industry would be reduced to ruin. And incidentally, I would like to know if, when registers his contracts granting rights to his operas, he pays the entire tax!... since then there would be two of us paying them!!... and even the gluttony of the fiscal authorities doesn’t extend that far, and for the duplicate registration of a document the tax is far less.

You must pardon me, Eg. Dott., if, not being a lawyer myself, I have gone on at such length; but for better or for worse, I believe I have clarified my viewpoint, and that the conclusions are these:

a) The present Act was not intended to be registered: it contains a reliable guarantee for the : the Company only runs the risk (and runs it willingly!!) of suffering the consequences of a late registration, and only in the event that the act is necessary for judicial purposes.

b) If registration is absolutely desired, it is necessary to redo everything from the start, with the limit of a simple fiduciary loan for the 200,000 excluding the guarantee offered: and I do not know with what convenience for , who had in the cited art.° 7 the best and most effective guarantee, while others are not possible.

c) It remains to be seen, on the other hand, whether and how to register the receipt of payment signed by , and what the relative effect would be regarding his declared income.

I would therefore greatly appreciate your response concerning these matters, possibly after having consulted the illustrious if you find it necessary; and for my part I will confer afterward with , to adjust things in terms of what you request, and to work out every detail according to what considers most opportune.

I await, with the utmost respect and consideration,