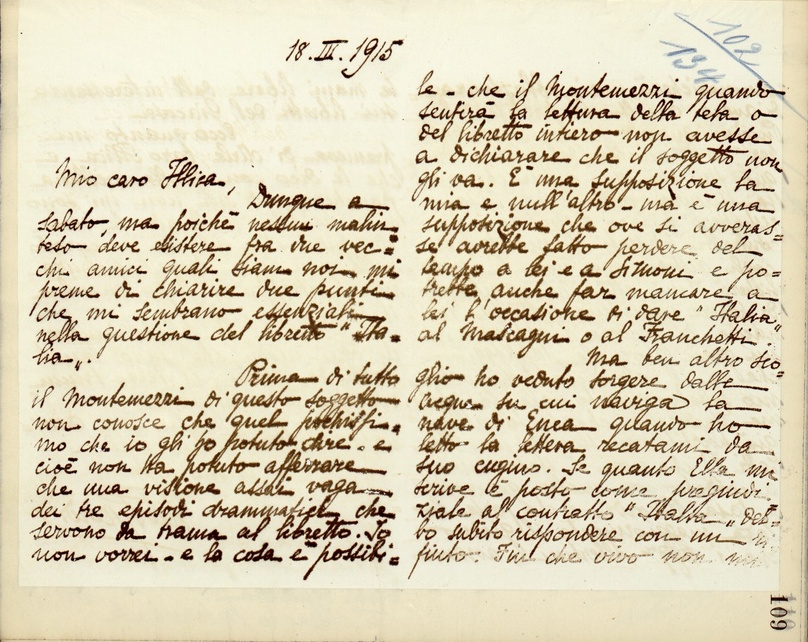 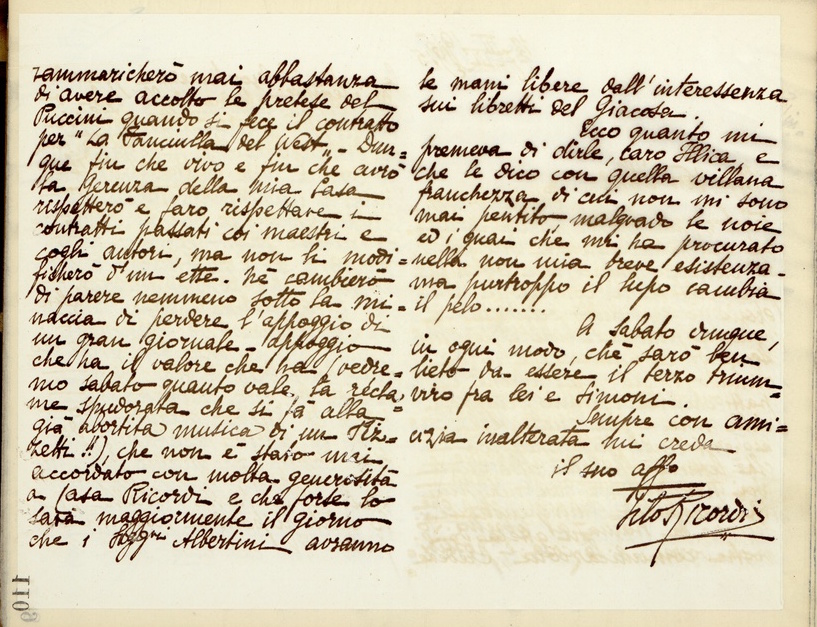 So then Saturday it is, but since there should be no misunderstanding between two old friends like us, I think it's necessary to clarify two points I consider essential regarding the question of the libretto "Italia".

First of all, Montemezzi knows nothing of this subject other than the little bit I was able to tell him — and that is to say, he managed to gather little more than an extremely vague idea of the three dramatic episodes upon which the libretto is based. I would not want — and such a thing is possible — that Montemezzi, once having been read a continuity draft or the entire libretto, would be inclined to declare that he did not like the subject. It's a suspicion I have and nothing more — but should this suspicion turn out to be accurate, it would mean you and Simoni had wasted your time, and it could also make you miss the opportunity to give "Italia" to Mascagni or to Franchetti.

But I saw quite another rocky shoal emerge from the waters carrying Aeneas's sailing ship when I read the letter brought to me by your cousin. If what you write is intended as a prerequisite for the "Italia" contract, I must immediately respond with my refusal. As long as I live I will never have sufficiently repented the decision to accept Puccini's demands when the contract for "La Fanciulla del West" was drawn up. Consequently, for as long as I live and remain the General Manager of my Firm, I will respect and enforce the contracts made in the past with composers and librettists, but I will not modify them one iota. Nor will I change opinion even under the threat of losing the support of an important newspaper — support that is what it is (we'll see on Saturday just how much its shameless publicity for the miscarried music of a Pizzetti is worth!!) and has never been but sparingly accorded to Casa Ricordi, and perhaps even more the day that the Sigg. Albertini loosen their hands from a share of the profits from Giacosa's libretti.

There you have what I wanted to say to you, dear Illica, and which I say with that unvarnished sincerity which I have never been given to regret, notwithstanding the pain and trouble it has brought me in my less than brief existence — but unfortunately you can't teach an old dog.......

Until Saturday then, since in any case I will be more than happy to be the third part of a triumvirate with you and Simoni.

Always with steadfast friendship, believe me