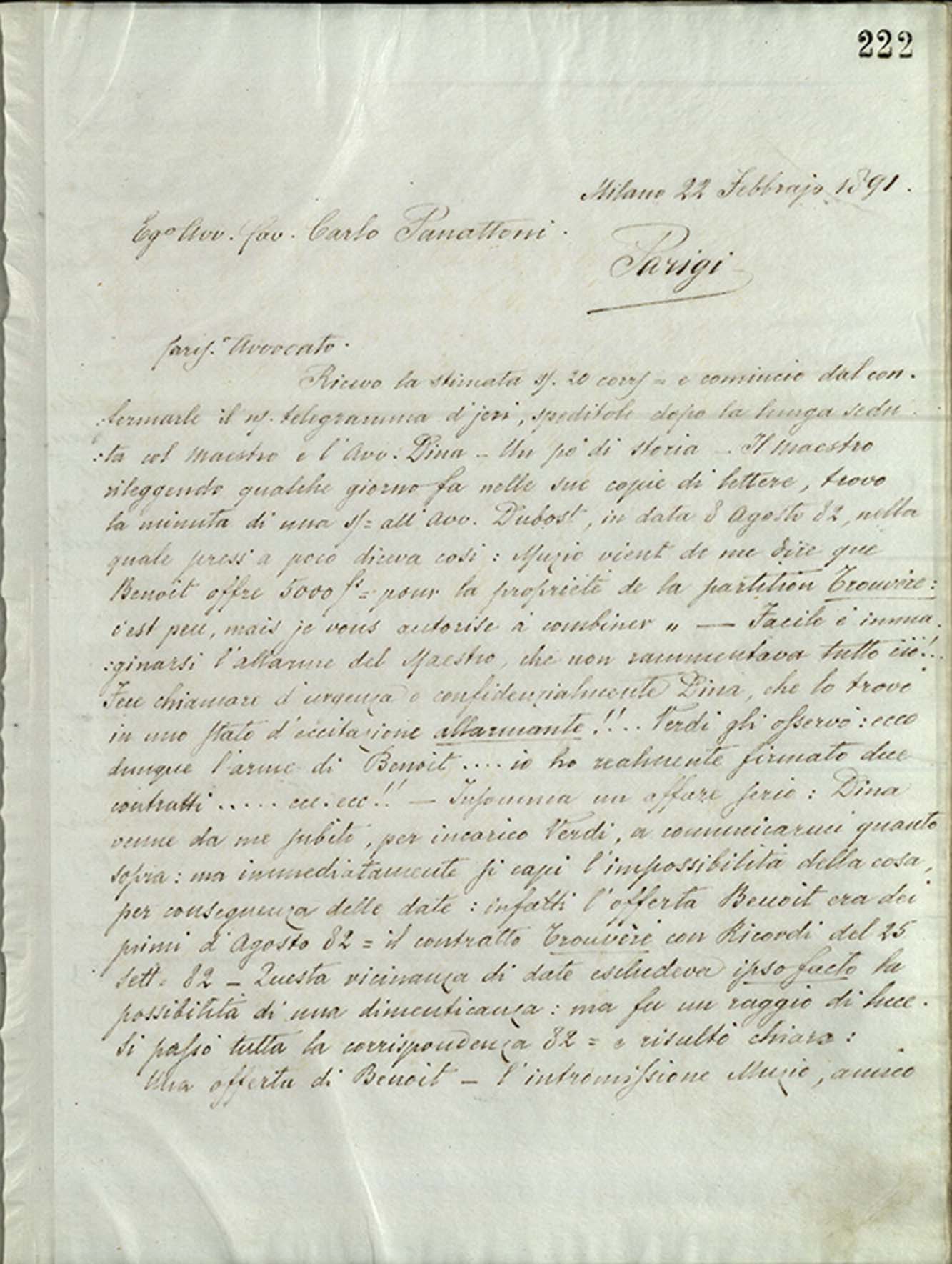 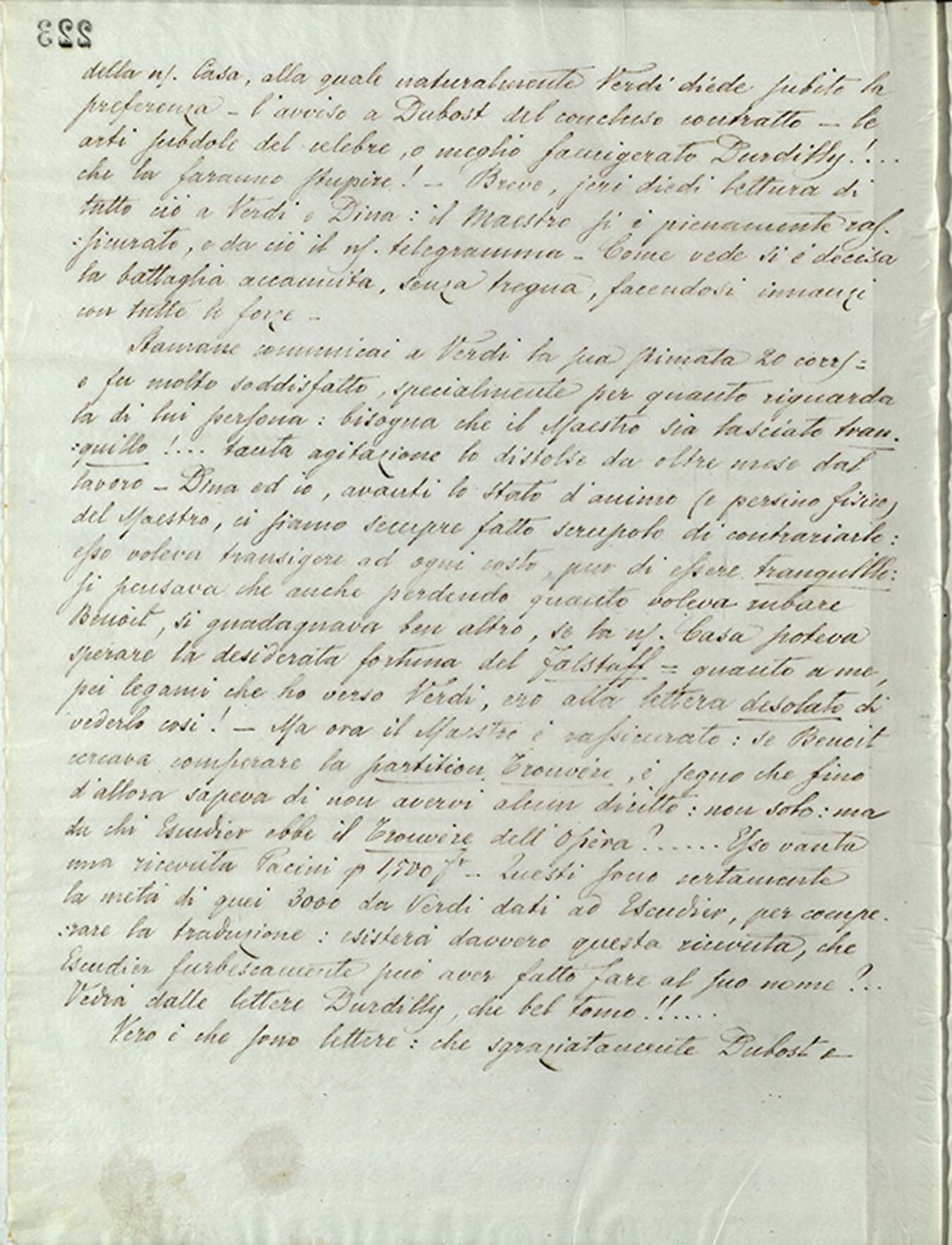 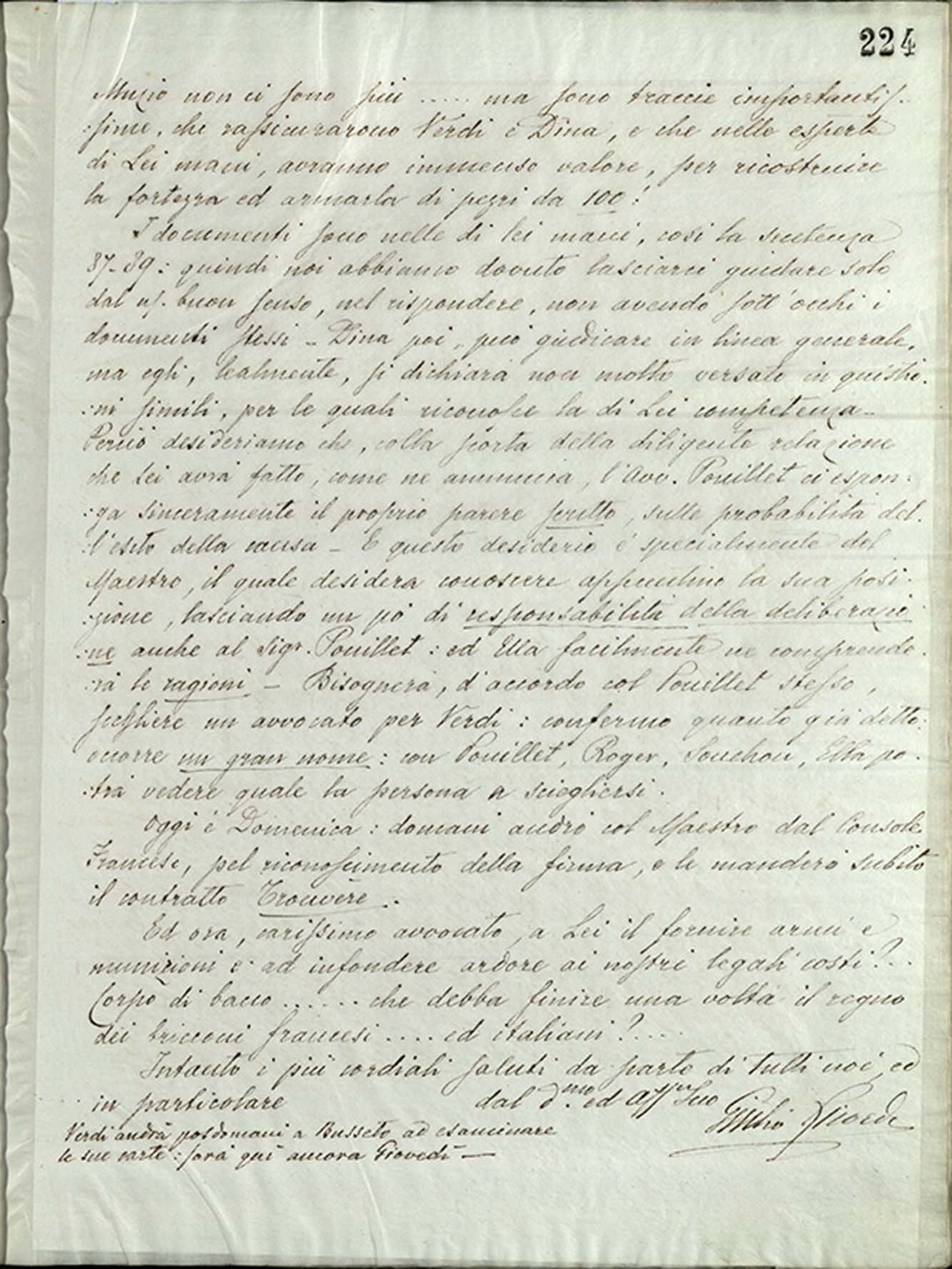 I have received your welcome letter of the 20th of this month, and I begin by confirming our telegram of yesterday, sent after a long meeting with the Maestro and Avv. Dina. A bit of background: while searching a few days ago in the copies of his letters, the Maestro found a note referring to a letter he wrote to Avv. Dubost, dated 8 August 82, in which he more or less said the following: [“]Muzio vient de me dire que Benoit offre 5000 fs= pour la proprietè de la partition Trouvère: c’est peu, mais je vous autorise à combiner.” [“Muzio came to me to say that Benoit offers 5000 francs to purchase the score of Trouvère: it is not much, but you may authorize him to arrange it.”]. You can easily imagine the Maestro’s alarm, since he remembered none of it!... He made an urgent and confidential request to see Dina, who found him in an alarming state of agitation!!.. Verdi told him: “Here then is Benoit’s weapon…. I had actually signed two contracts”….. etc. etc.!! – In other words, it’s a serious business. Verdi sent Dina to me right away to inform me of the above; but the impossibility of the thing immediately became evident, given the dates involved: in fact, Benoit’s offer was in the early part of August '82, while the Trouvère contract with Ricordi is dated 25 September '82. This proximity of dates excludes ipso-facto the possibility of something having slipped Verdi’s mind; but it was a ray of light. After a review of all of the correspondence from '82, this sequence of events surfaces clearly:

An offer from Benoit – the intercession of Muzio, a friend of our Firm, to whom naturally Verdi immediately gave preference – Dubost notified of the concluded contract [with Ricordi] – subtle manipulation by the famous, or better infamous Durdilly!... which will astonish you! – In short, yesterday I read all of this to Verdi and Dina; the Maestro was completely reassured, and forthwith our telegram. As you can see, the decision was that the battle should be fiercely fought, relentlessly, pressing onward with all possible force.

Today I informed Verdi of your letter from the 20th of this month, and he was quite satisfied, especially for that which regards him personally: the Maestro needs to be left in peace!... all of this agitation has cost him more than a month of work. Given the Maestro’s emotional (and even physical) state, Dina and I were always careful not to oppose him when he wanted to settle at any cost in order to regain some peace of mind. The idea was that, even losing what Benoit wanted to steal, there would be other significant earnings our Firm might hope to obtain from the fortunes of Falstaff. As for me, for the ties that bind me to Verdi, I was literally desolate to see him in that state! – But now the Maestro is reassured: the fact that Benoit attempted to purchase the score of Trouvère meant that he already knew he had no claim. Not only: from whom did Escudier procure Trouvère for the Opéra?..... He claimed to have a receipt from Pacini for 1,500 francs. These are certainly half of the 3000 Verdi gave to Escudier to purchase the translation. Does this receipt, which Escudier could cleverly have had drawn up in his name, truly exist?.. You will see from the letters of Durdilly, what a character!!....

It is true that they are letters, and that unfortunately Dubost and Muzio are no longer alive…. but they leave an extremely important trail that goes far to reassure Verdi and Dina, and that in your expert hands will be immensely valuable for reconstructing the fortress and arming it with heavy artillery!

You have the documents in hand, as well as the '87-'89 court sentence; consequently, in their absence we had to rely only upon our good sense to guide us in responding. Dina, of course, can draw some general conclusions, but he has made it clear, to his credit, that he is insufficiently expert in such questions and defers to you for your specific competence. Then, based on the careful report you will have provided as promised, we would like Avv. Pouillet to give us his candid, written opinion regarding what probability we have of winning the case. This is especially important to the Maestro, who wants to know his position in detail and to leave some of the responsibility for the decision to Sig. Pouillet – you can easily understand the reasons for this. It will be necessary, in agreement with Pouillet, to select a lawyer for Verdi. I confirm what has already been said: we need a widely respected name: together with Pouillet, Roger, and Souchon, you will determine just whom to choose.

Today is Sunday; tomorrow I will go with the Maestro to the French Consulate to authenticate the signature, then I will immediately send you the Trouvère contract.

And now it’s up to you, dear counsel, to supply the weapons and ammunition, and to rouse our lawyers there to action!..

But for the love of heaven…… will there ever be an end to the dominion of these French – and Italian – scoundrels?

Meanwhile, most cordial greetings from everyone here, and in particular

From yours warmly and most sincerely,

Verdi will leave the day after tomorrow for Busseto to look through his papers; he will return Thursday.