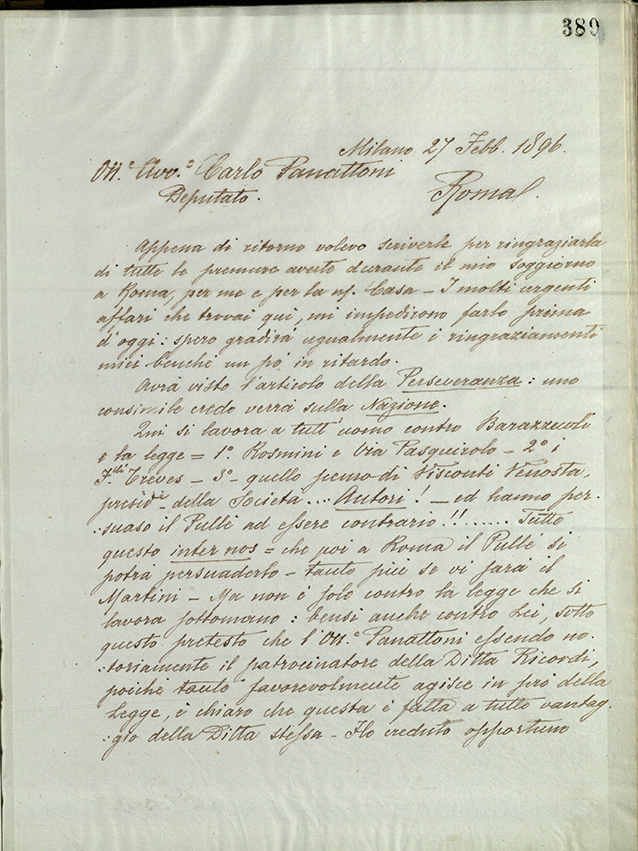 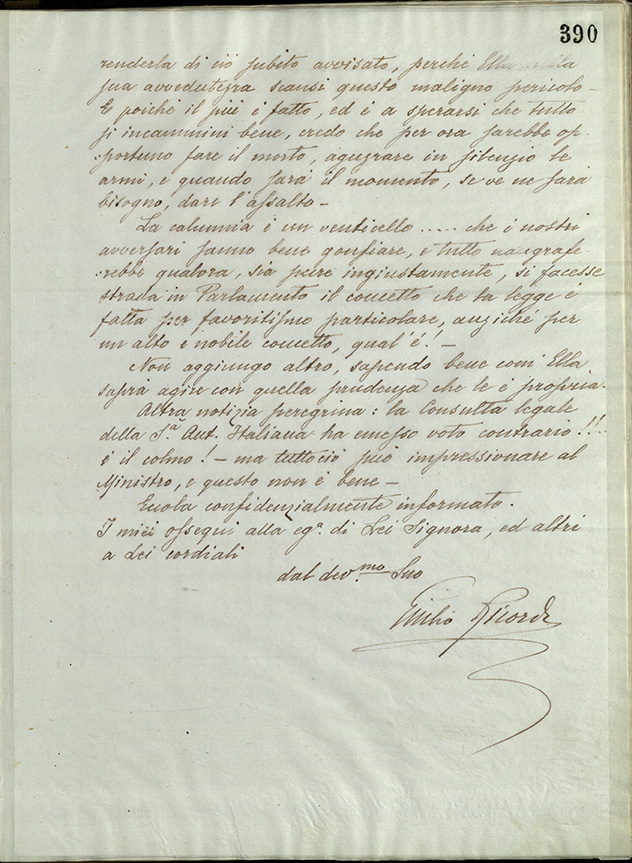 Immediately upon returning from Rome I wanted to write to you and thank you, on behalf of myself and our Company, for your care and consideration during my stay there. Various urgent business affairs that awaited me here prevented me from doing so until today, but I hope you will accept my thanks just the same, even if they are a bit late.

You will have seen the article in La perseveranza, and I believe something similar will appear in La nazione. Here the lot of them are working together against Barazzuoli and the law: 1st Rosmini and Via Pasquirolo– 2nd the Fratelli Treves – 3rd that fool Visconti Venosta, president of the Società Autori! – and they persuaded Pullé to be opposed to it!!...... All of this inter nos [between us] – since in Rome Pullé can be convinced otherwise, all the more likely if Martini is there. But it is not only against the law but also against you that they conspire, using the pretext that since the Hon. Panattoni, who famously is a proponent of Casa Ricordi, argues so strongly in favor of the Legislation, it is clear that it was written entirely to the advantage of our Company. I thought it best to advise you of this right away, so that you can discretely dodge this nasty trap. And since the greater part is done and we may hope that things will proceed well, I think that for now it would be most appropriate to play dead, sharpen our weapons in silence, and be ready when the time comes to attack if necessary.

“Slander begins as but a breeze”..... which our adversaries know how to inflate only too well; and everything would be sunk if, however unjustly, in Parliament the idea were to gather momentum that the legislation was created to favor particular interests rather than for a lofty and noble concept, which it is!

I’ll say nothing more, fully aware that you know how to proceed with all due discretion.

Another bit of news has just come my way: the legal Council for the Società Autori Italiana has voted against the legislation!!... That takes the cake! – but all this may influence the Minister, and that’s not good.

There you have been confidentially informed of everything.

My humble respects to you and your wife, and cordial regards

From yours most sincerely,