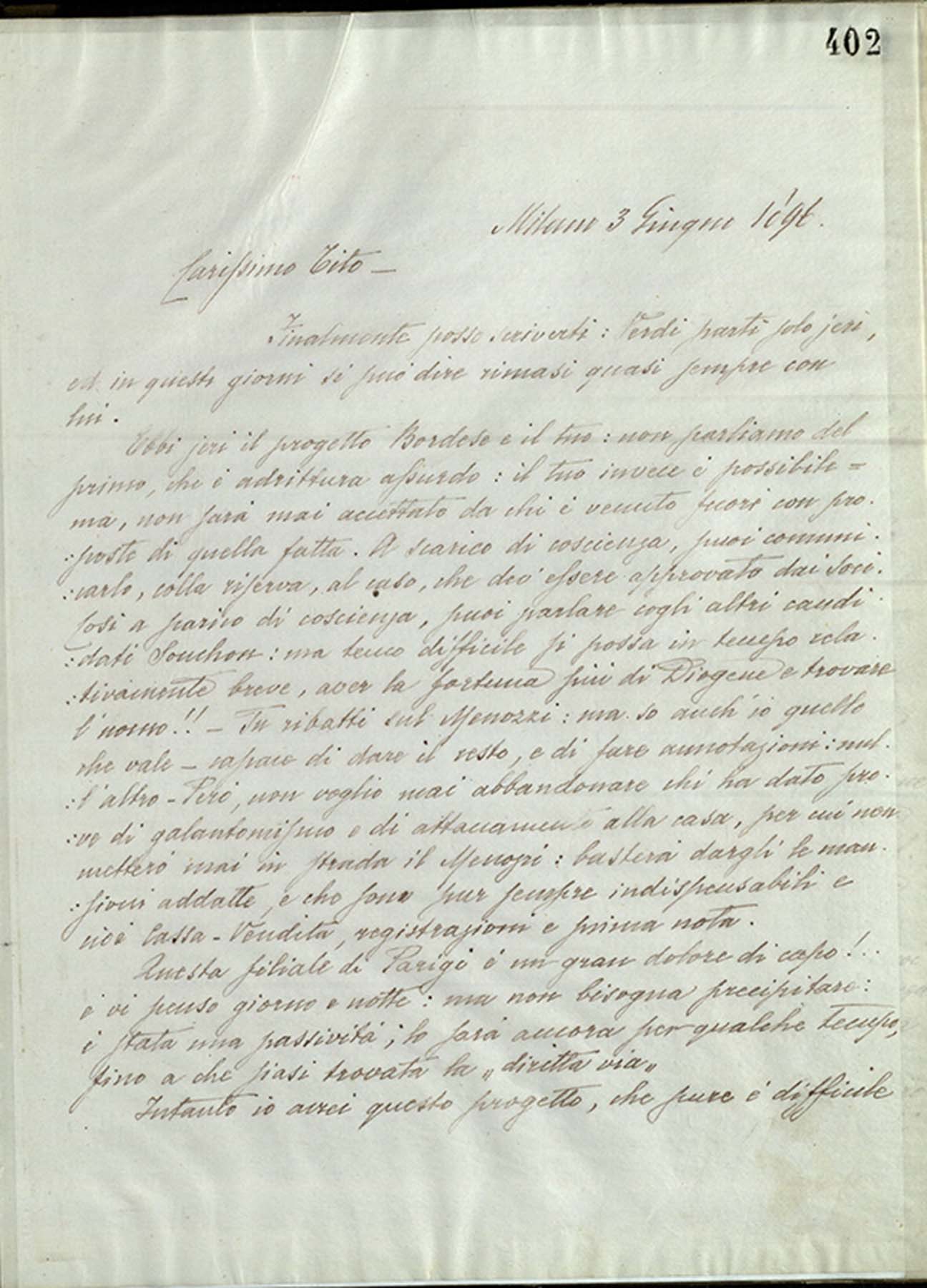 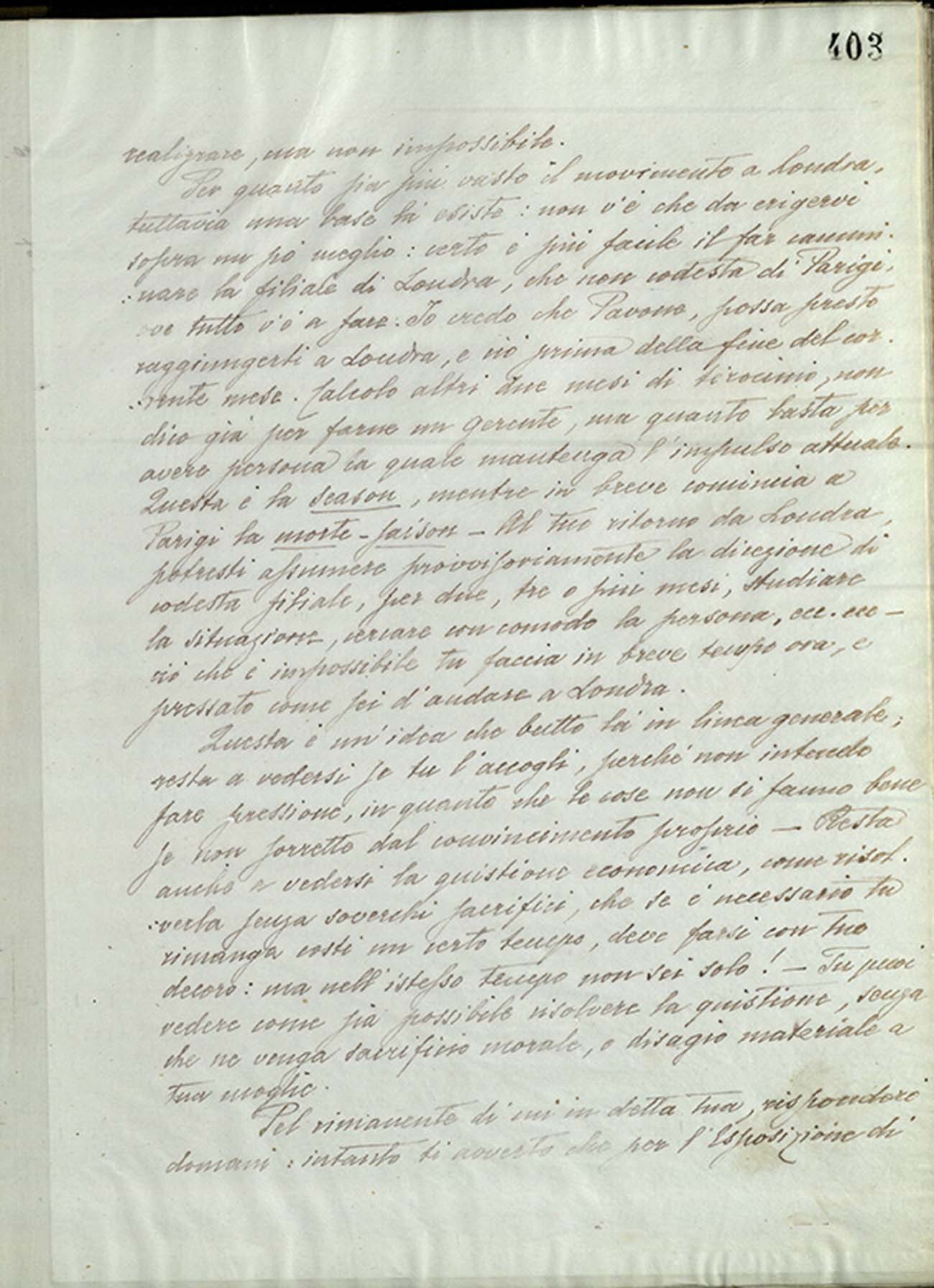 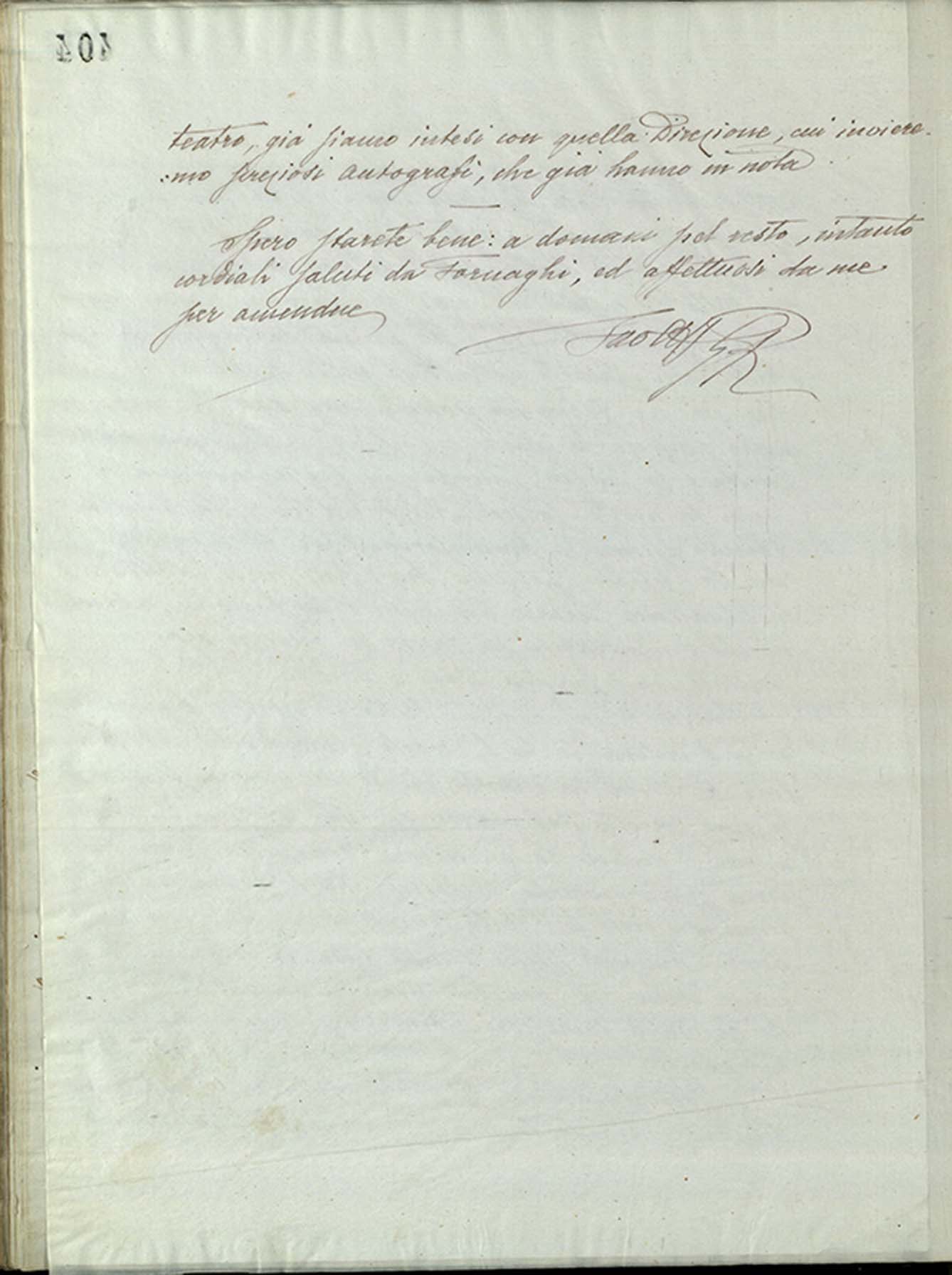 At last, I can write to you: Verdi left only yesterday, and in these past days, I was almost constantly with him.

Yesterday I received the Bordese project and yours. Let’s not discuss the former, which is simply ridiculous. Yours, however, is doable, but he who had come up with a proposal of that former kind won’t ever accept it. For your own peace of mind, you can communicate your proposal, with the caveat, in the event, that the Shareholders must approve it. And thus, always for your peace of mind, you can discuss it with the other candidates [proposed by] Souchon. Nevertheless, I fear it will be difficult, in short order, to have more luck than Diogenes and to find the man you’re looking for!! You insist on Menozzi, but I know what he’s good for: he’s able to make change for the customer and to register the sale, but nothing more. Nonetheless, I never want to abandon someone who has shown he is a gentleman and loyal to his employer, so I will never fire Menozzi: it will suffice to assign him tasks adapted to his level and which are nonetheless indispensable to running a shop, i.e., serving as the cashier, annotating the sales, and keeping after the petty cash ledger.

This Paris branch is one enormous headache!.. I think about it day and night, but there is no reason to make rash decisions. It has been thus far a loss, and will continue to be for some time, until we find the “the right path.”

Meantime I have this other project, which is also difficult to realize but not impossible.

While commercial activity in London is far larger [than in Paris] nonetheless we have a good foundation there, which we only need to build upon a bit better. Certainly, it will be easier to get the London affiliate to the point where it runs profitably, than this Paris affiliate, where everything still needs to be done. I think that Pavone can move to London soon, perhaps before the end of this month. I estimate another two months of training, not with the aim of turning him into a manager but rather enough to have a person there who can maintain the established pace. This is the Season there, whereas in Paris it will soon be the morte-saison [off-season]. When you return from London you could provisionally take on the management of this affiliate for two, three or more months, study the situation, seek out the right person without haste, etc. etc. All things that will be impossible for you now in a rush, since you are under pressure to go to London.

This is a proposal I throw out there as a rough idea; it’s up to you to see if you agree, as I do not want to force you since things can only be done well if they match one’s own personal convictions. The economic issues also remain to be seen, how to resolve them without making excessive sacrifices, since it will be necessary that you remain there for a certain amount of time, and you need to be able to reside there with the decorum you find appropriate; but on the other hand, you will not be alone in this undertaking! Only you can determine whether it is possible to resolve these issues without making personal sacrifice and without discomfort for your wife.

As for the other matters raised in your letter, I will respond tomorrow. Meanwhile I inform you that regarding the Exhibit at the theatre we have reached an agreement with the Administration, to which we will send the precious autographs, for which they already have a list.

I hope you both are well; for the rest, I’ll write tomorrow, meanwhile cordial greetings from Tornaghi and fond ones from me to you both.