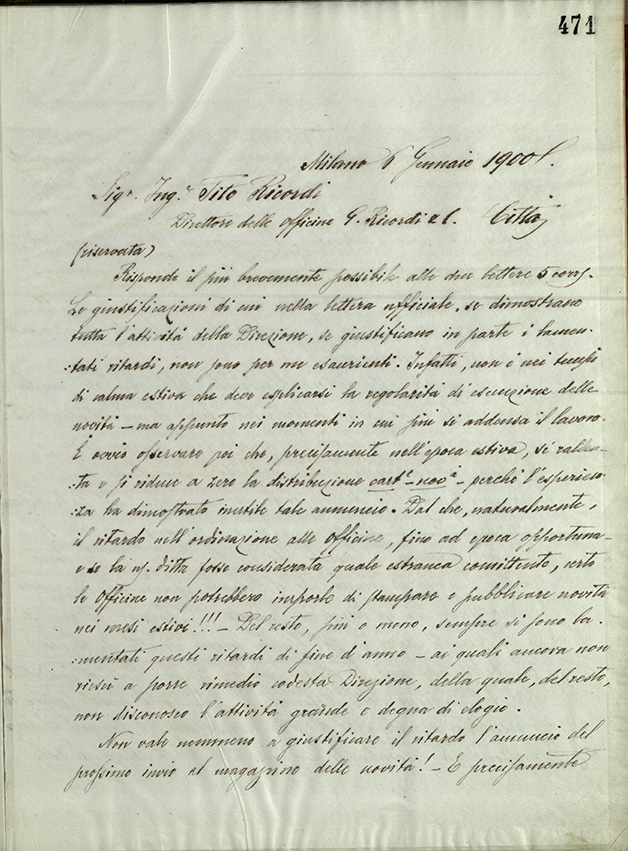 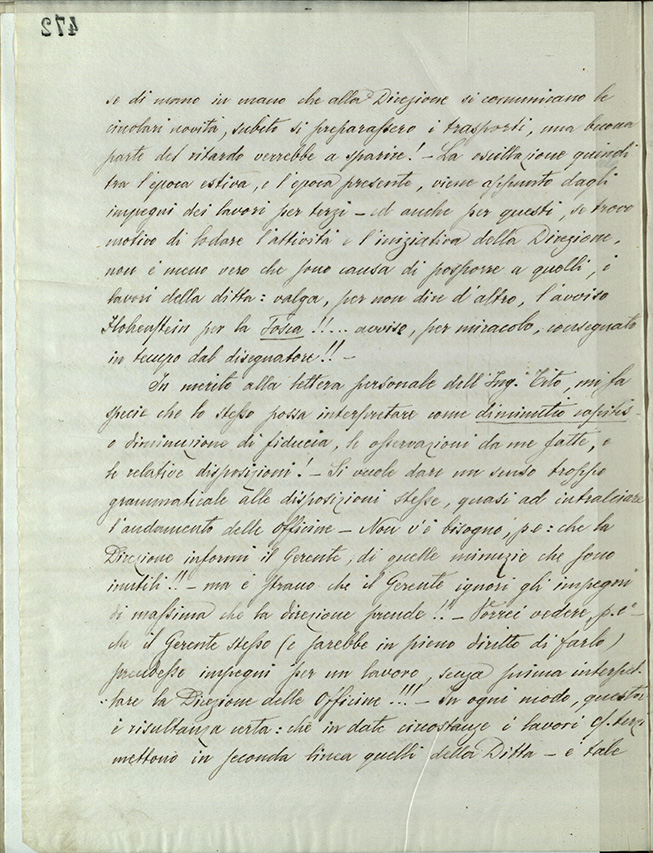 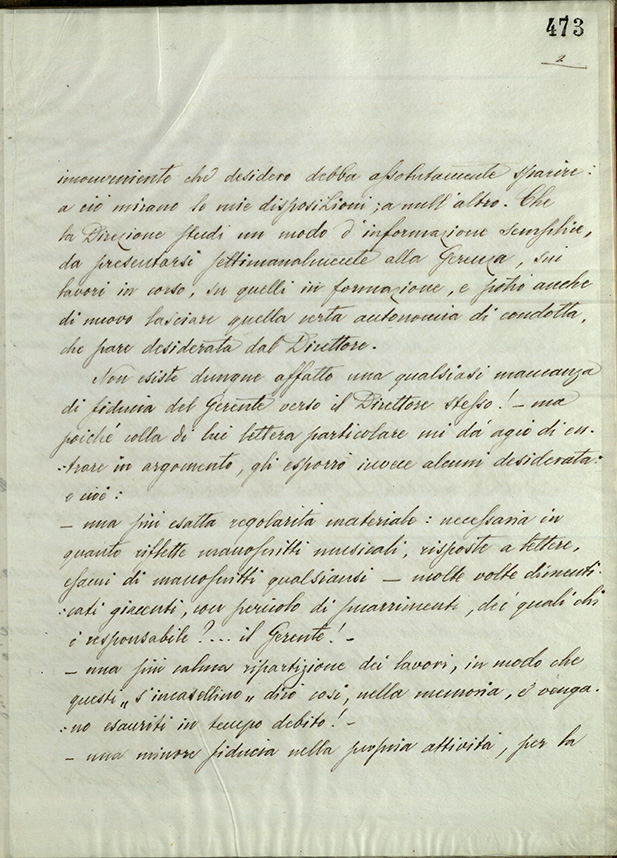 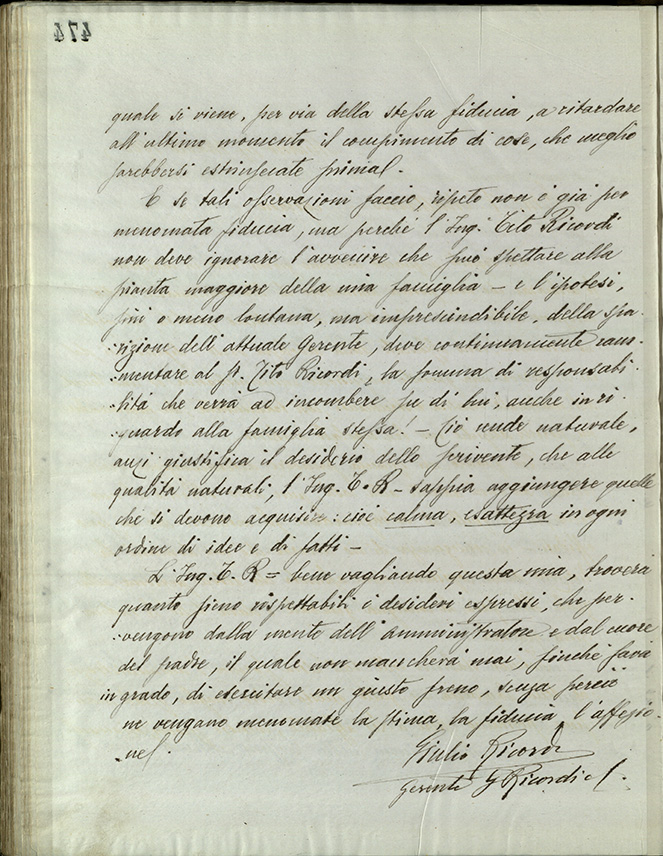 I’ll respond as briefly as possible to the two letters of the 5th of this month. The official letter offers justifications which — while they describe all the activity of the Office of the Director and while they justify in part the lamented delays — nonetheless do not fully explain things. In fact, it is not in the calm of the summer that one needs to ensure the regular production flow of new editions, but rather in those periods in which the workload is heaviest. Furthermore, it is obvious that in the summer season, the distribution of new publications slows down to zero, because experience has shown that it is useless to announce new editions at that time. And from that, it naturally follows that orders sent to the workshops slow down, until a more opportune time: if our company were to be considered in the same way that a third-party client is, the Workshops could not, certainly, demand that the Company print and issue its new editions in the summer months!!! And to a greater or lesser degree we have always received complaints about these end-of-year delays, delays which this Office of the Director still has not found a way to resolve, even though I recognize that this Office of the Director works a great deal, and admirably.

Nor does the announcement of the imminent delivery to the warehouse of new editions serve to excuse the delay! Indeed if, hand in hand with the announcement to the Office of the Director that new editions have arrived, you would immediately arrange for their shipment, a considerable part of the delay would disappear! Thus the fluctuation between the summer months and the current months is caused by the work taken on behalf of third parties. And even if, for such work, I have reason to praise the initiative and activity of the Office of the Director, it is nonetheless true that they are the cause of postponing this company’s work in order to fulfill those orders. One example for all, Hohenstein’s poster for Tosca!! A poster which, miraculously, the graphic artist had in this occasion consigned on time!!

There is, therefore, no loss of trust on the part of the General Manager toward the Director! But since the Director’s letter offers me the opportunity to address the question, I will list some of the things I wish for, which are:

-  A more precise regularity in keeping after practical matters, which is necessary when dealing with musical manuscripts; when responding to correspondence; when examining manuscripts of any type, which are often set aside and forgotten, with the risk that they may get lost, and then whose responsibility does it become? Of the General Manager!

-  A more orderly division of labor, so that these assignments are “compartmentalized”, as it were, in your memory, and are thus completed by their deadlines!

-  Placing less blind faith in your own capacities, which leads to delaying until the last moment the completion of tasks that it would have been better to take care of earlier.

I repeat, if I make such observations it is not due to a diminished trust on my part, but rather because Ing. Tito Ricordi must not ignore the future that may await the principal offspring of my family as well as the hypothesis, more or less far-off but inevitable, that the current General Manager will no longer be with us, which should serve as a constant reminder to Sig. Tito Ricordi of the sum of responsibilities that will come to weigh upon him, and even on the family itself!  This renders natural, and indeed justifies, the desire of this writer that Ing. T.R. will come to understand how to add, alongside his innate qualities, those that he must acquire, and that is, steadiness and precision at every level of ideas and deeds.

Ing. T.R., in carefully considering this letter of mine, will find how worthy are the desires expressed therein, which come from the mind of an administrator and from the heart of a father, a father who will never fail, so long as he is able, to exercise a justified restraint upon him, but without ever, with such restraint, diminishing the respect, trust, and affection he maintains for him.