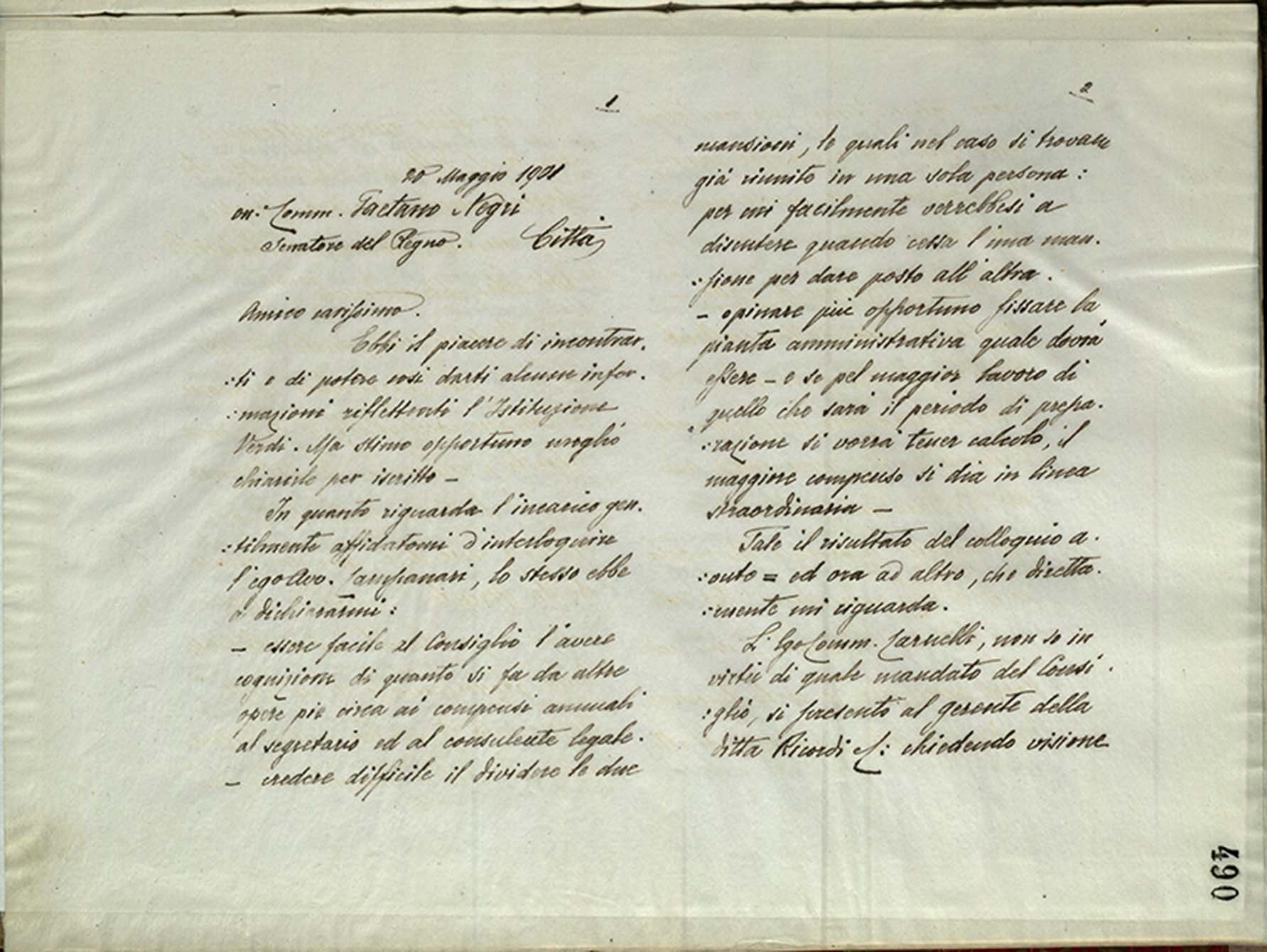 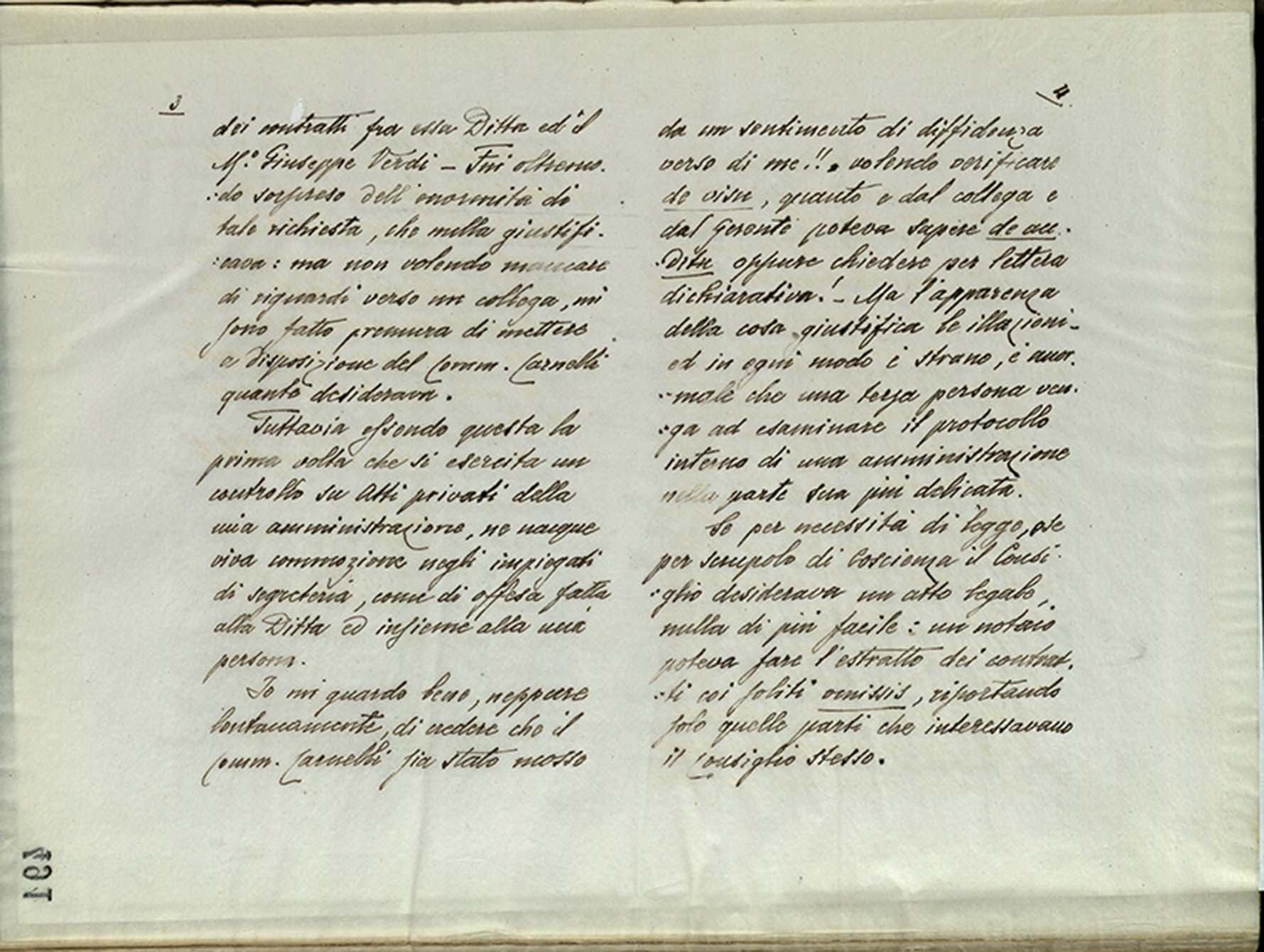 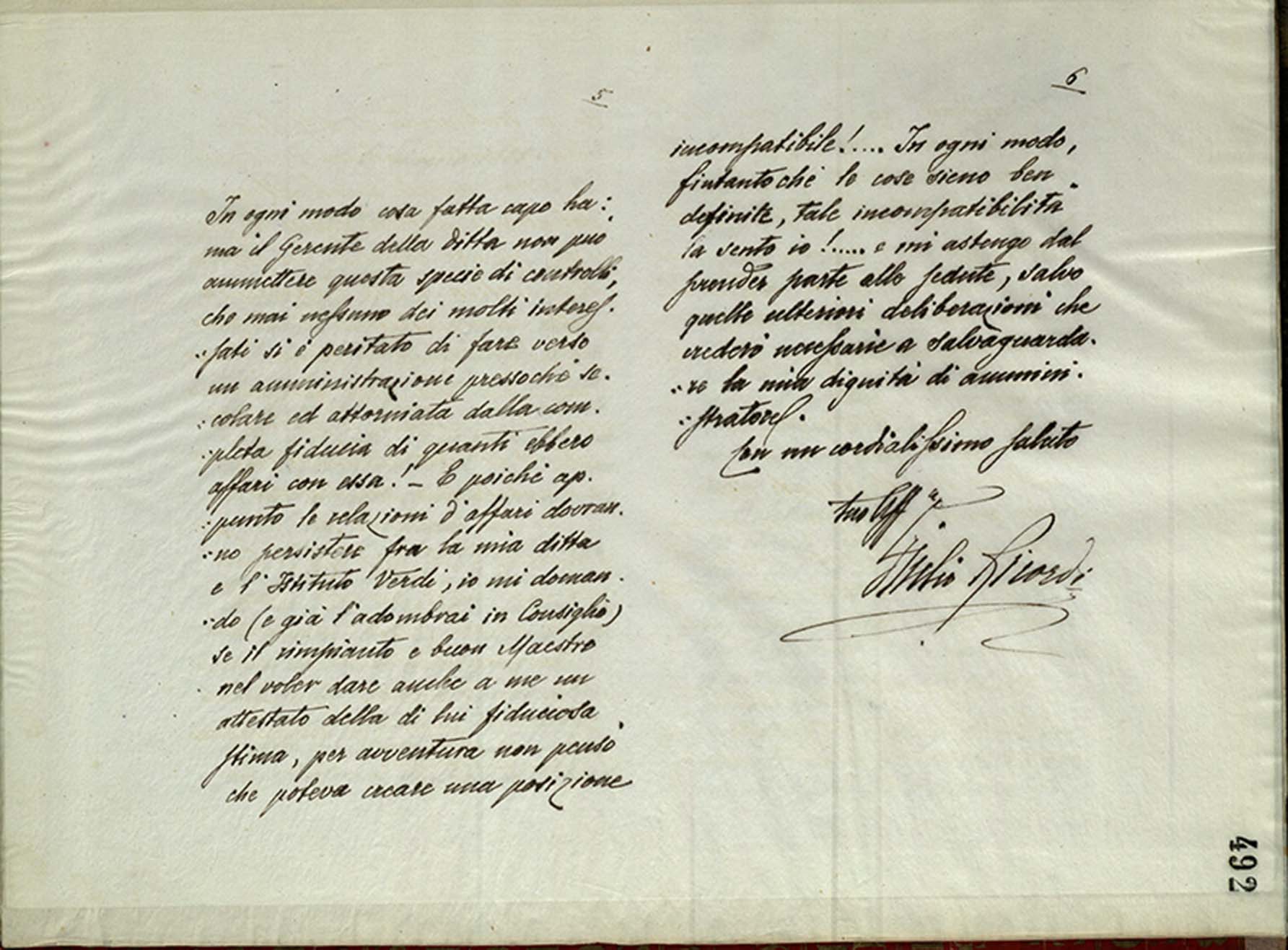 Senator of the Kingdom. City

I had the honor of meeting you and thus offering you some information regarding Verdi’s Institution. But I think it advisable to give you further clarification in writing.

With regard to the task entrusted to me to discuss the matter with the distinguished Avv. Campanari, he stated as follows:

- he believes it will be easy for the Council to obtain information about the annual salaries that other charities pay their secretary and to their legal consultant.

- he believes it will be difficult to separate those two jobs where both jobs are already carried out by a single person: one could see where disagreement might arise about where, exactly, the responsibilities of one position end and of the other begin.

- he suggests it would be preferable to define the administrative structure as we feel it should be, and if this creates more work in the interim for the person currently charged with both jobs, this should be compensated by an extra amount on a one-time basis.

This is the summary of my discussion with him. And now I shall pass to another subject which regards me directly.

The distinguished Comm. Carnelli, by virtue of what mandate from the Council I cannot say, came to the office of the general manager of G. Ricordi e C. asking to examine the contracts between that Company and M. Giuseppe Verdi. I was extremely surprised by the enormity of this request, which was wholly unjustified, but since I did not want to show a lack of respect toward a colleague, I hastened to place the requested documents at Comm. Carnelli’s disposition.

Nonetheless, since this is the first time that someone asked to audit private contracts of my administration, it gave rise to a significant emotional reaction among the employees of the secretarial staff, who saw it as an offense to the Company and to me, personally.

I know better than to suspect, even remotely, that Comm. Carnelli was motivated by a sense of mistrust toward me!! So I assume he wanted to verify de visu [in person] what he could have obtained from me, his colleague and the general manager, either de auditu [verbally] or via a written declaration! But the appearances [of how things went] justify the inferences — and in any event it is strange and irregular that a third party should ask to examine an administration’s internal records of the most delicate kind.

If, for legal reasons or for its own scruples, the Council wanted a legal document, nothing would have been easier: a notary could have prepared an extract of the contracts with the usual redacted omissis, reporting only those parts that were directly of interest to the Council.

What’s done is done, in any event, but the General Manager of this company cannot allow this type of audit, which no one among the many interested parties has ever gone so far as to request from the administration of a company that has been active for nearly a century and which enjoys the complete trust of all those who have done business with it! And since, in point of fact, the business relationship between my company and the Verdi Institute must continue, I ask myself (and have already hinted at during Council meetigns) whether the late and good Maestro, while wanting to give me a vote of confidence and esteem, did not foresee that he might be placing me in an incompatible position!... In any case, so long as things are not clearly laid out, I feel this sense of incompatibility!... and therefore I will abstain from participating in the sessions, except for those further deliberations which I consider my presence to be necessary in order to preserve my dignity as an administrator.

With the most cordial regards,