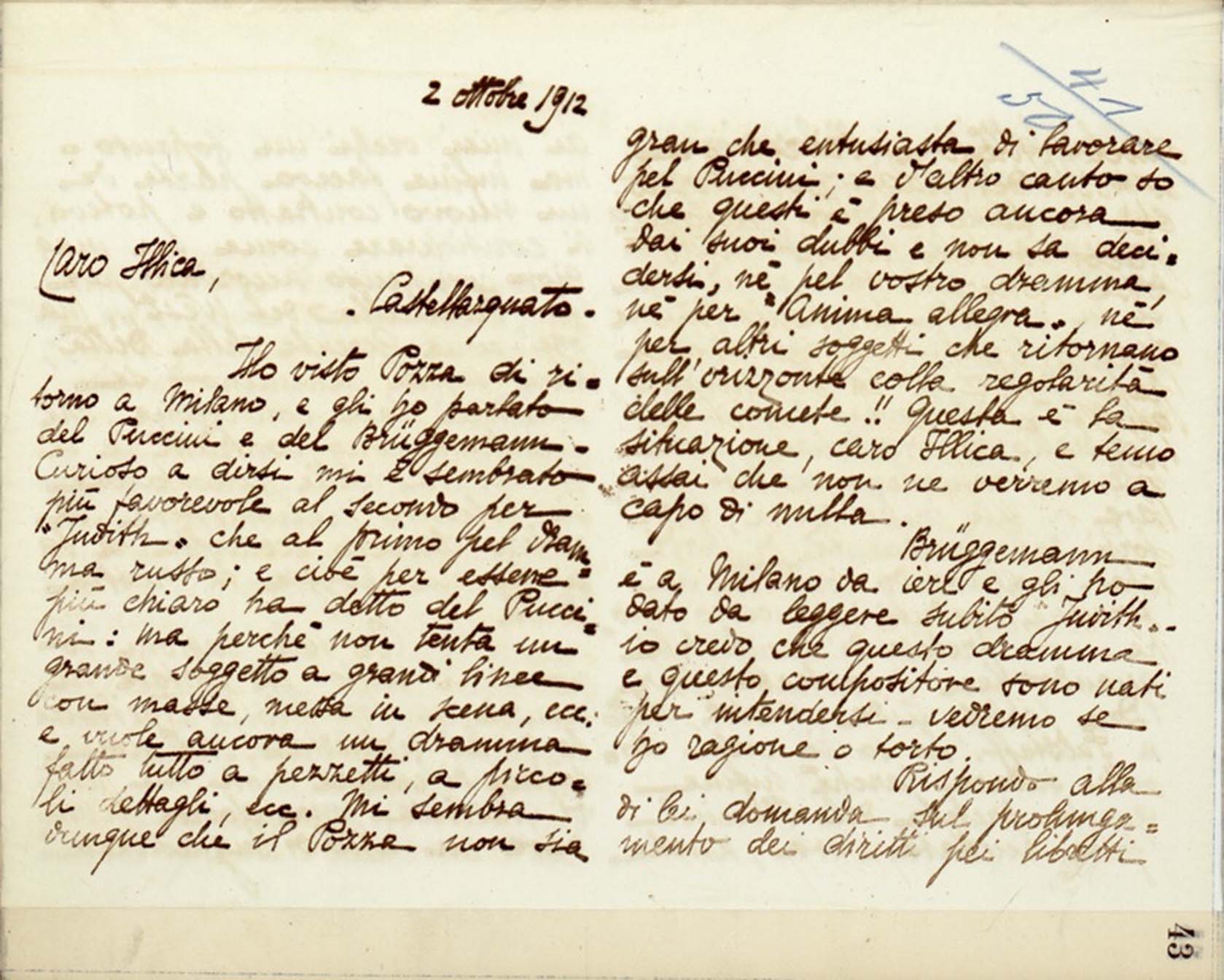 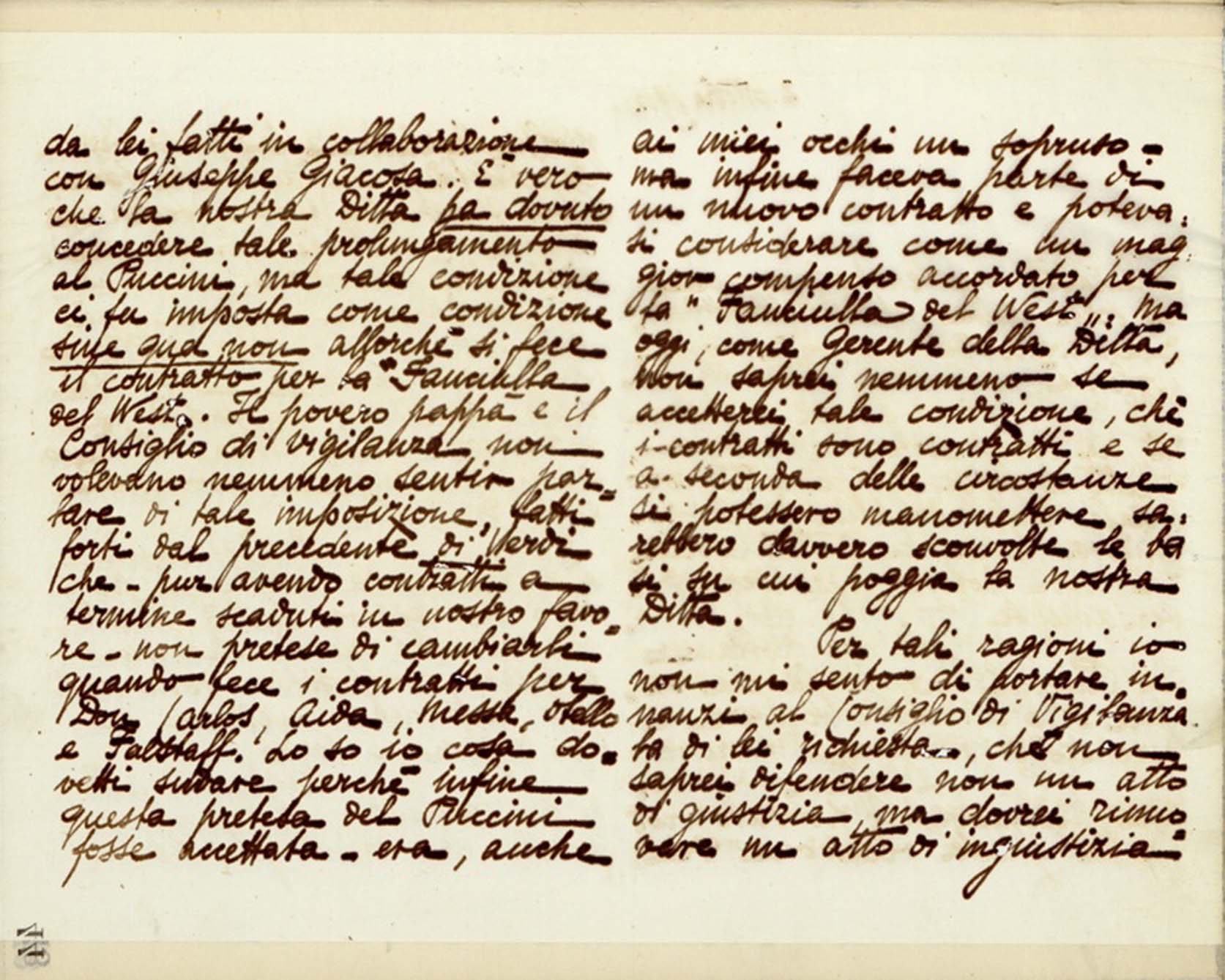 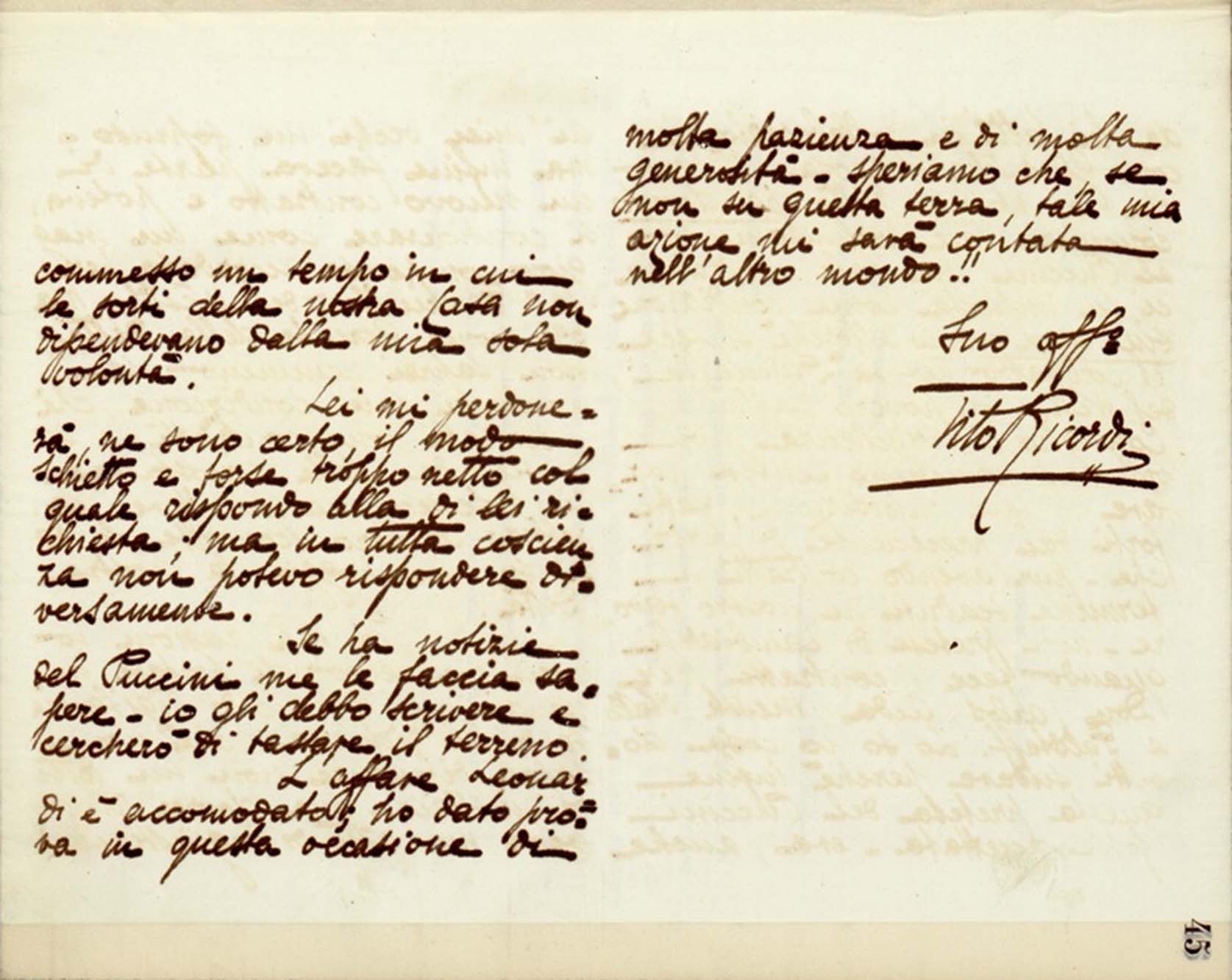 I saw Pozza when he returned to Milan, and I spoke with him about Puccini and Brüggemann. Strange to say, he seemed to be more favorable toward the latter for "Judith" than toward the former for the Russian drama; and more specifically, he wondered why Puccini doesn't try a grand subject with great bold strokes, with crowds, elaborate staging, etc., rather than wanting instead another drama made of little pieces, of tiny details, etc. It seems to me then that Pozza is not particularly enthusiastic to work for Puccini; and on the other hand I know that Puccini continues to struggle with uncertainty and can't decide for your drama, or for "Anima allegra", or for any of the other subjects that regularly appear on the horizon like comets!! This is how things stand, dear Illica, and I greatly fear that we'll never get to the bottom of it all.

Brüggemann has been in Milan since yesterday, and I immediately gave him "Judith" to read — I think this drama and this composer were made for one another — we'll see if I'm right or wrong.

In response to your question regarding the extension of rights for the libretti you wrote in collaboration with Giuseppe Giacosa: It's true that our Company had to concede that extension to Puccini, but he forced it upon us as a condition sine qua non in order to obtain the contract for the "Fanciulla del West". My poor father and the Supervisory Board had not the least intention to accept such an imposition, armed as they were with the precedent established by Verdi, who — even having contracts that had expired in our favor — did not pretend to change them when he made the contracts for Don Carlos, Aida, Messa, Otello, and Falstaff. I know what I had to go through to gain approval for this demand by Puccini — it was an abuse of power in my opinion as well — but in the end it was part of a new contract and could be interpreted as greater compensation for the "Fanciulla del West". Now, as General Manager of the Firm, I don't know if I would even accept such a condition today, given that contracts are contracts and if it were possible to manipulate them according to circumstances, it would truly upend the very foundations that support our Company's operating principles.

For these reasons I am unwilling to bring your request before the Supervisory Board, since I wouldn't know how to defend not an act of justice but rather the renewal of an act of injustice that was committed when the fate of our publishing house was not determined by me alone.

You will forgive me, I am certain, for the frank and perhaps overly blunt tone of my response to your request; but in all good conscience I could not respond in any other way.

If you have news of Puccini do let me know — I need to write to him and I'll try to test the waters.

The Leonardi affair has been settled; I gave abundant proof of my patience and generosity for the occasion. Let's hope that, if not in this world, my good deed will be counted in the one beyond!!