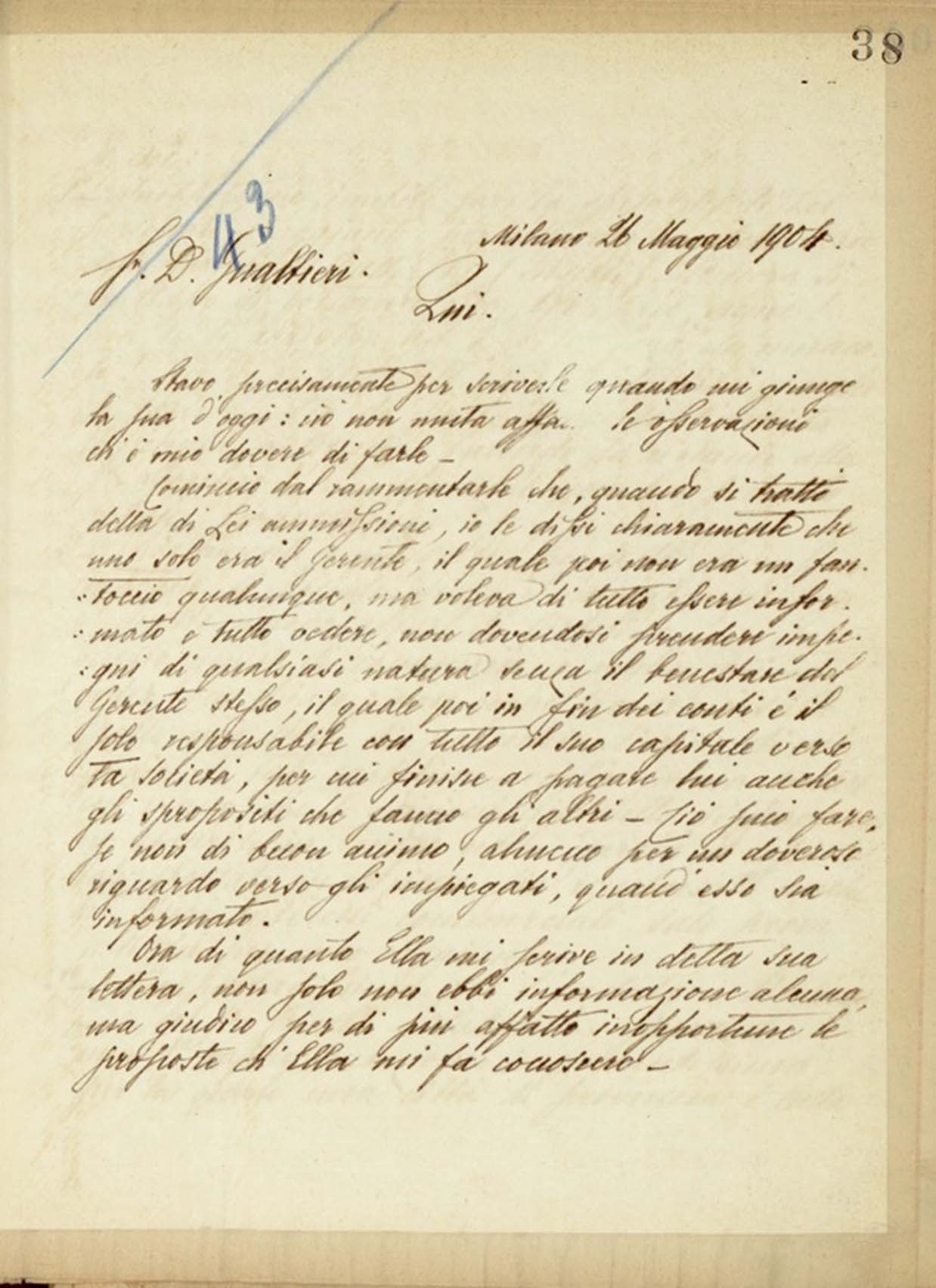 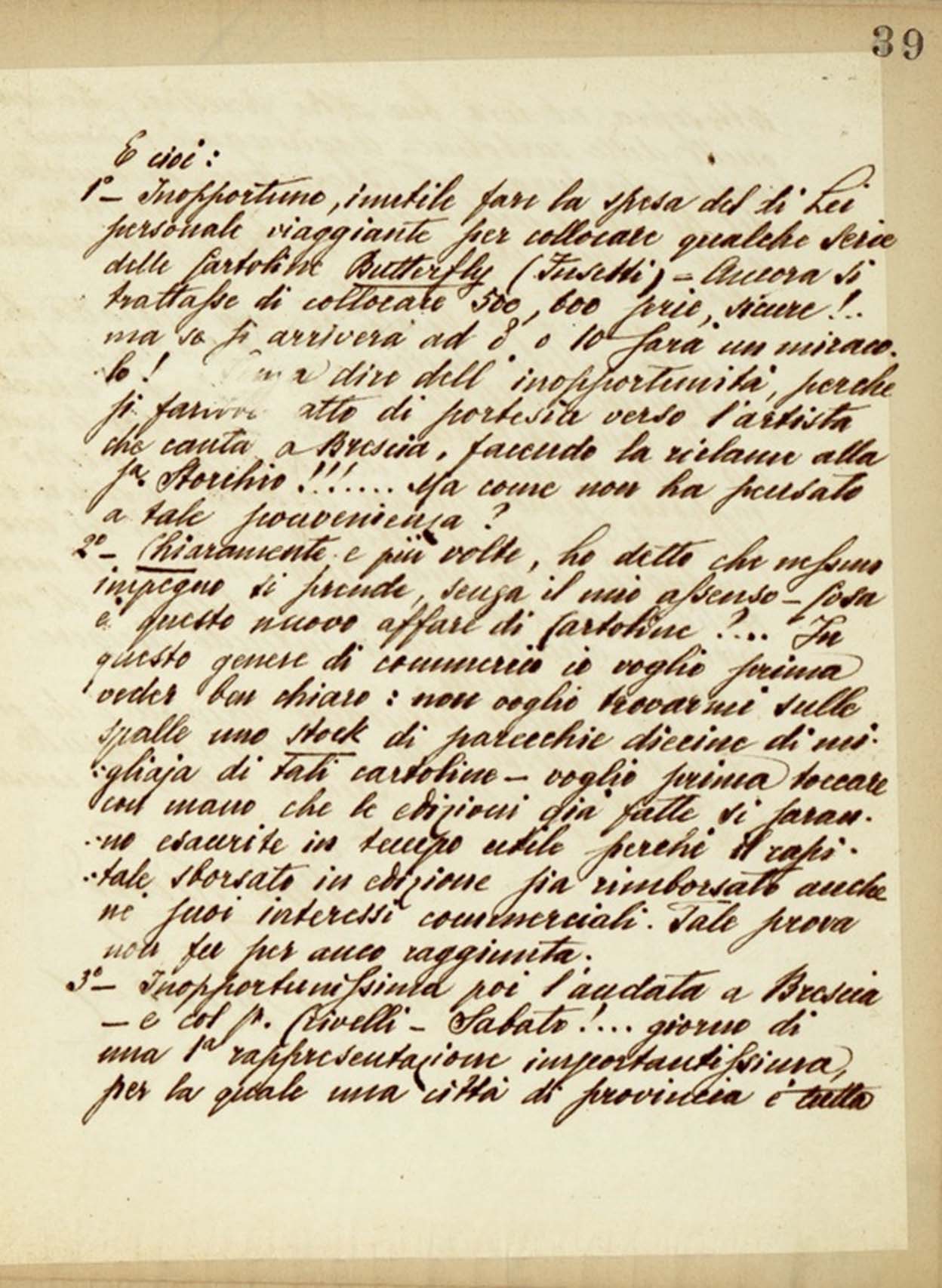 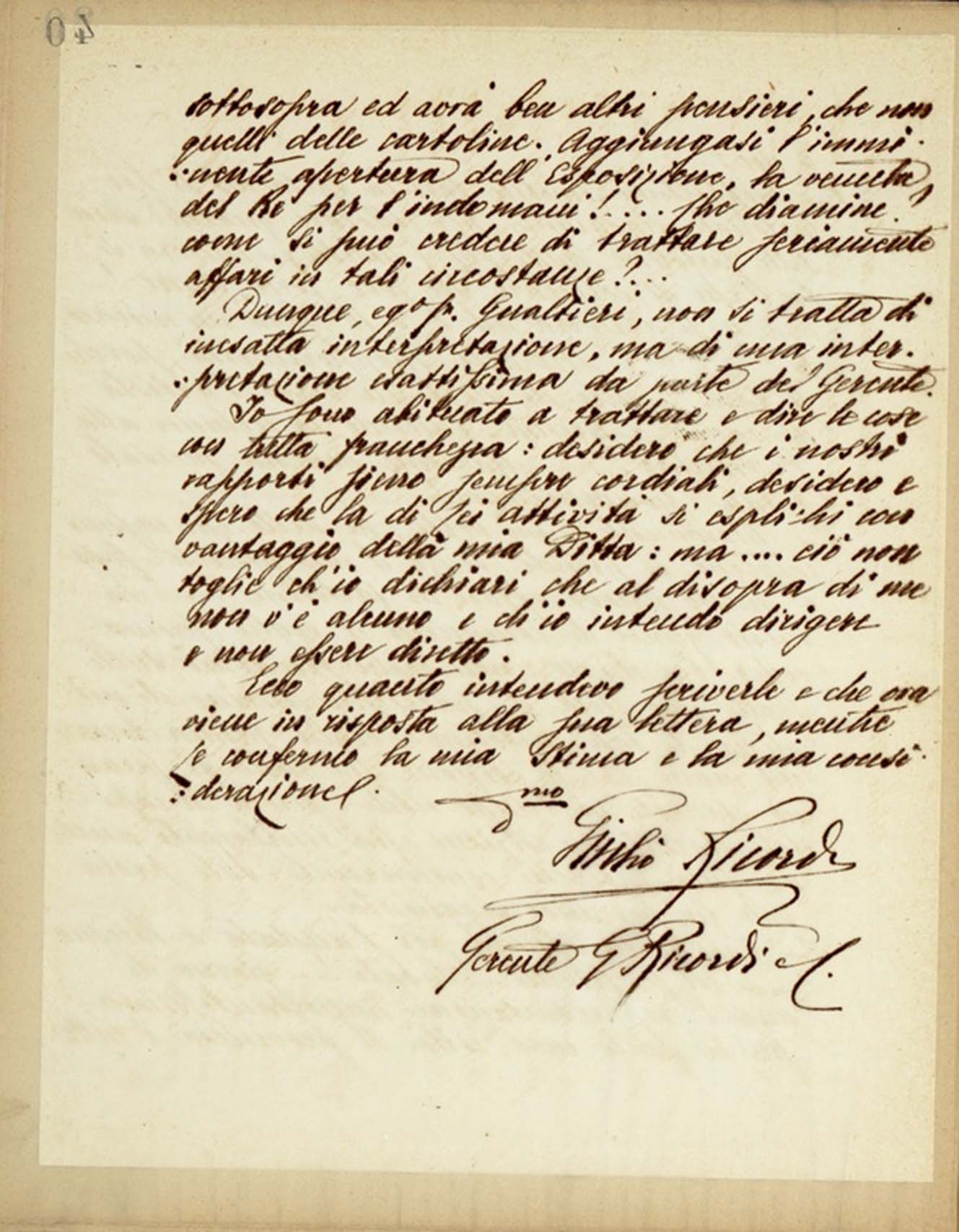 I was just about to write you when your letter of today arrived; this does not alter the observations I am obliged to make to you.

I begin by reminding you that when you were hired I told you clearly that there was only one General Manager, who was not a mere figurehead but who rather wanted to be kept informed of and to see everything, and without whose approval no commitments of any kind were to be undertaken, since he is, at the end of the day, the sole person responsible, with all his capital invested in the Company, and who therefore ends up paying even for the mistakes of others. This he can do, if not willingly, at least out of a sense of responsibility towards the employees, so long as he has been kept informed.

What you now write in your letter regards matters about which I was not informed, and furthermore I find the proposals you make to be inopportune.

1st It is inopportune and useless to spend money sending your travelling sales staff to place a few sets of the Butterfly Postcards (Insects). If it were a matter of securing orders for 500, 600 sets, certainly! – but if you sell 8 or 10 it will be a miracle! Not to mention how inopportune it would be, because it would be a discourteous gesture toward the artist who sings at Brescia by promoting Sig.ra Storchio!!!... How is it possible that such an impropriety did not occur to you?

2nd I have told you clearly and repeatedly that no commitment should be undertaken without my approval. What is this new business with the postcards?...  In this sort of commerce, I want to see clearly before committing: I do not want to find myself with a stock on hand of several tens of thousands of such postcards – first, I want proof that the previous runs will have sold out in time so that the capital invested in new editions, even the interest, will be recuperated. This still has not occurred.

3rd The trip to Brescia is extremely inopportune – and with Sig, Crivelli. Saturday!... The day of a highly important premiere, for which a provincial city is all topsy-turvy and will have far more things to focus on than postcards. Add to that the imminent opening of the Exposition, the arrival of the King the following day!... What the hell? How can you imagine you can conduct serious business deals in such circumstances?...

I am used to treating matters and saying things with absolute frankness: I wish for our rapport to always be cordial, I wish and hope that your activity will be an advantage for my Company. But… the fact remains, as I’ve said, that there is no one above me in the hierarchy and that I intend to manage, and not to be managed.

This is what I had planned to write you and which now comes as a response to your letter. I confirm my respect and appreciation.