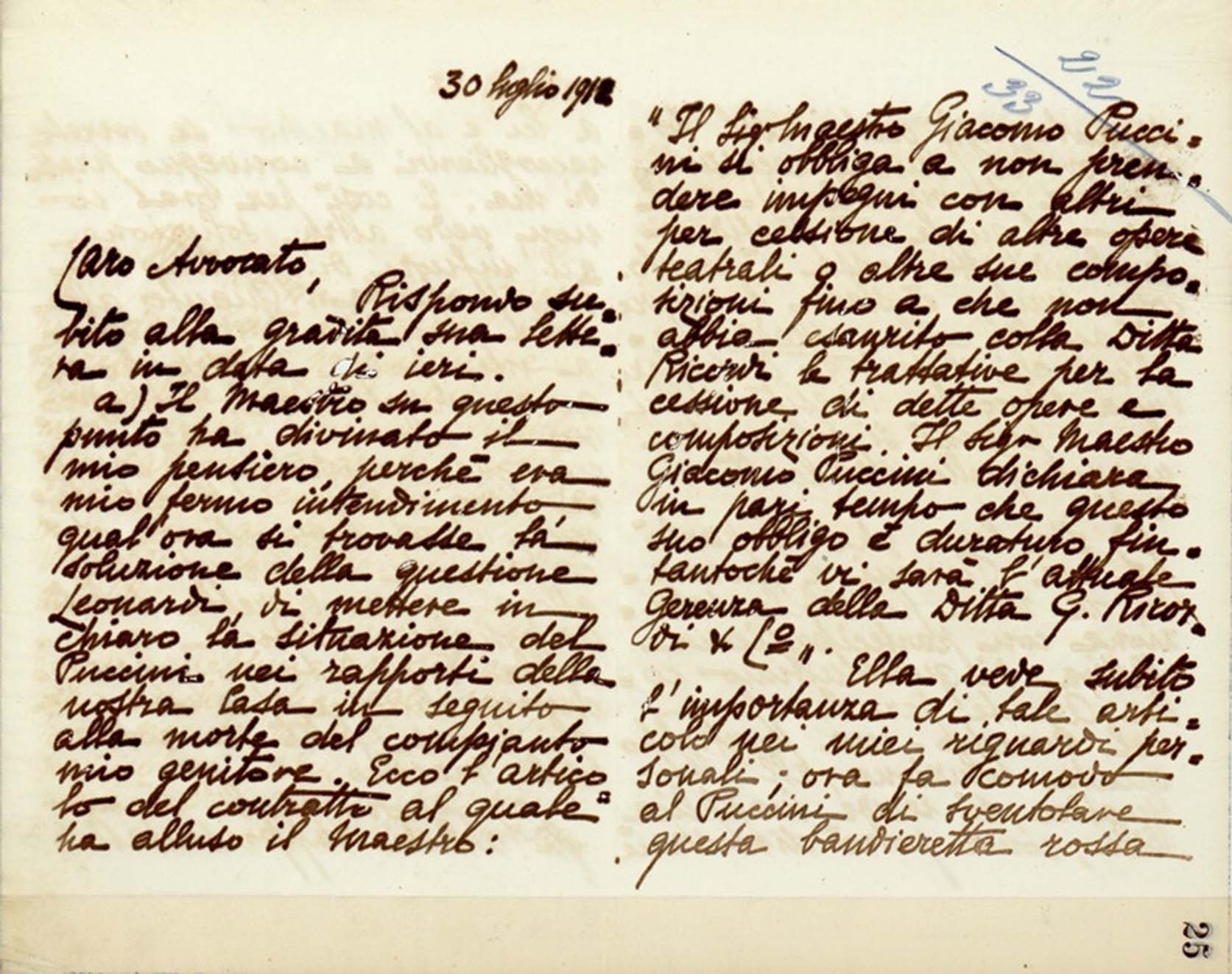 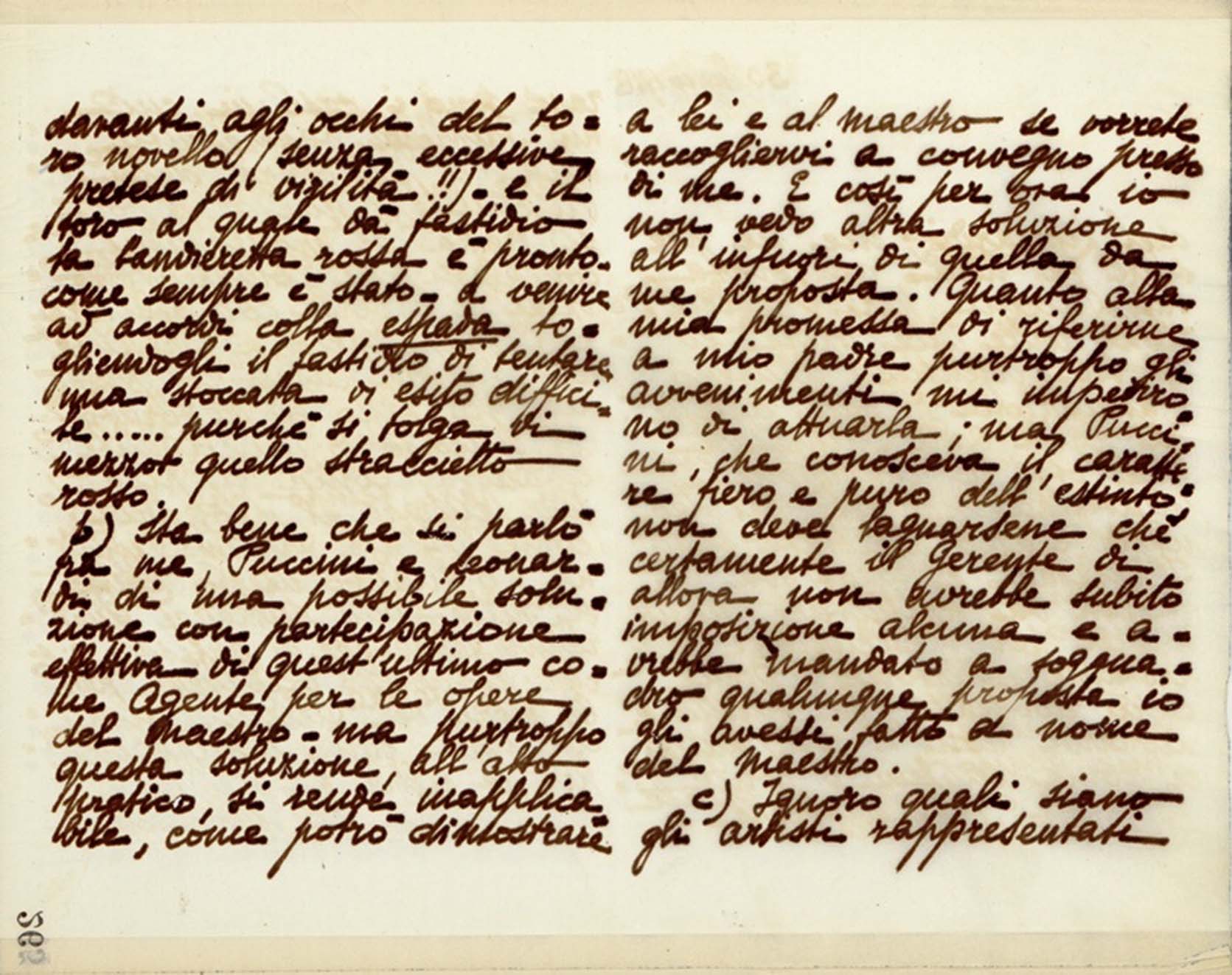 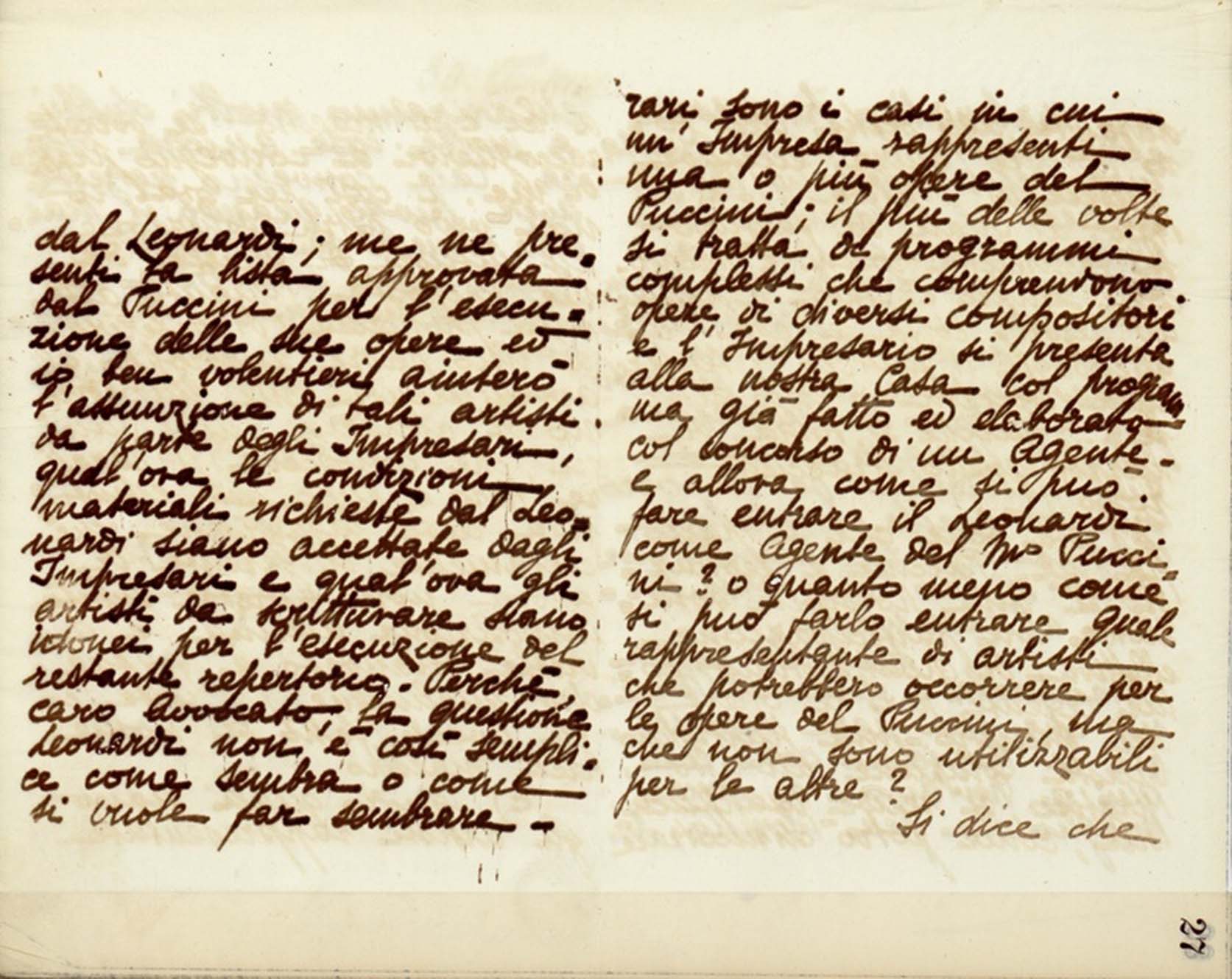 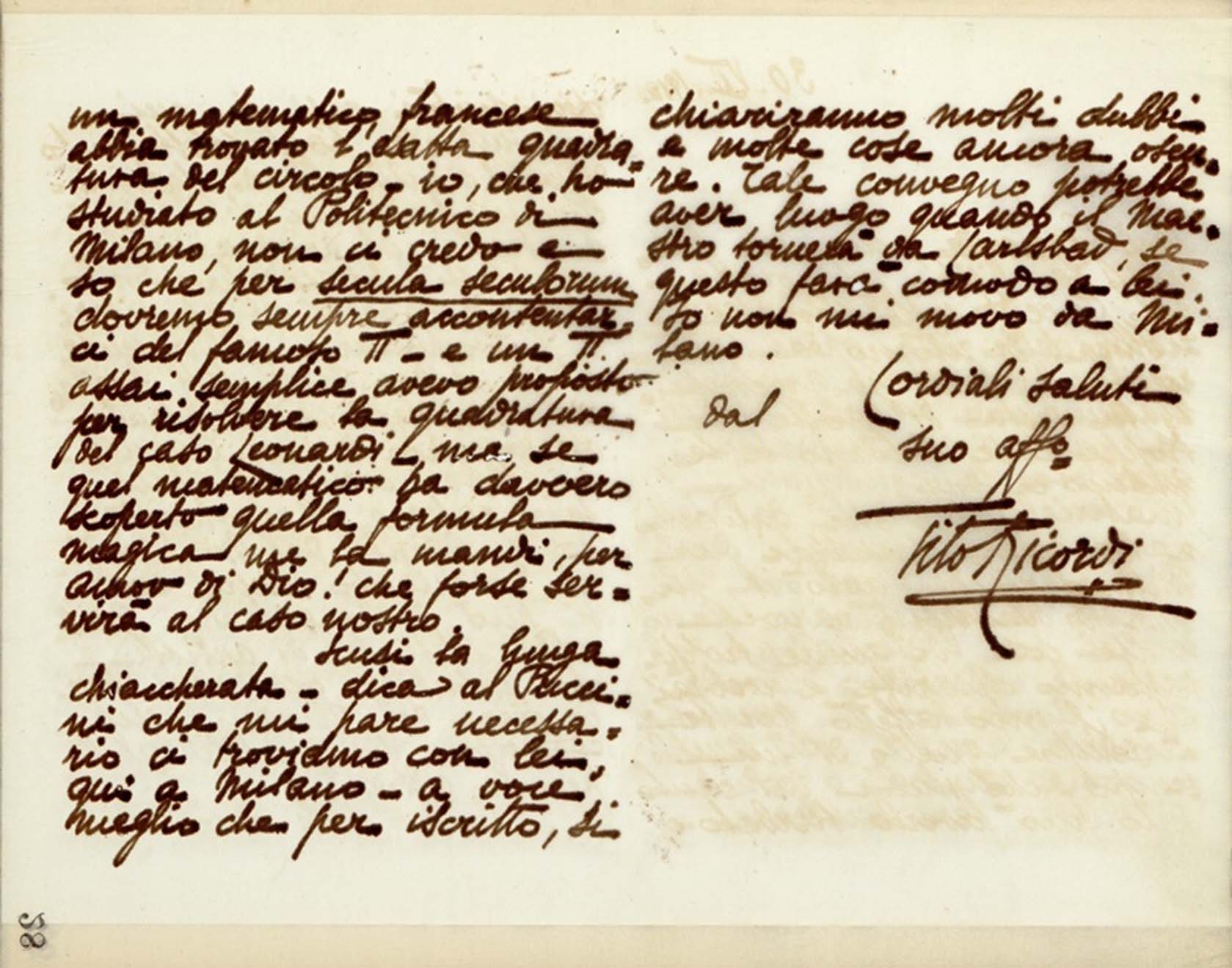 I will respond forthwith to your welcome letter from yesterday.

a) On this point the Maestro divined my thoughts, because I was firmly resolved, should a solution be found for the Leonardi question, to make perfectly clear the terms of Puccini's rapport with our Firm following the death of my beloved father. Here is the article of the contract that the Maestro mentioned: "Sig. Maestro Giacomo Puccini agrees to undertake no third-party commitments for other eventual operas or original compositions until he has first exhausted negotiations with the Ditta Ricordi for these operas and compositions. Sig. Maestro Giacomo Puccini further declares that this obligation remains in effect for the duration of the current General Management of the Ditta G. Ricordi & C°." You can immediately see the importance of this article as it regards me personally: Puccini finds it convenient now to wave this red cape before the eyes of the new young bull (hardly making an excessive show of his virility!!) — and the bull who is annoyed by the red cape is ready — as he has always been — to come to an agreement by means of the sword, allowing [Puccini] to avoid the annoyance of attempting a thrust with considerable risk of success... so long as he sets aside that red rag of his.

b) It was fine for the three of us, myself, Puccini, and Leonardi, to have discussed a possible solution involving Leonardi's effective participation as Agent for the Maestro's operas — but unfortunately this solution has no practical viability, as I can demonstrate to you and the Maestro if the two of you would like to meet with me here. Consequently, I see no other solution for now beyond the one I have proposed. As far as my promise to refer the matter to my father goes, unfortunately intervening circumstances prevented me from doing so; but Puccini, who was quite familiar with the deceased's proud and virtuous character, would do well not to complain, since certainly that General Manager would have tolerated no orders whatsoever and torn to shreds any proposal I might have made in the Maestro's name.

c) I am unaware of the artists Leonardi represents; present me with the list approved by Puccini for the performance of his operas and I will gladly promote the engagement of these artists by the Impresari, provided that the conditions requested by Leonardi are acceptable to them and that the artists are valid choices for the other repertoire involved because, dear Counselor, the Leonardi question is not as simple as it seems, or as one might want it to seem. Those cases are rare where an Impresario can produce one or more of Puccini's operas: more often than not the programming is complicated and involves operas by different composers, and the Impresario comes to us with everything already arranged and elaborated with the assistance of an Agent — and so how can Leonardi enter into this process as the Agent for M° Puccini? or even at that, how could he function as the representative for those artists who might be necessary for Puccini's operas but not for the others?

It is said that a French mathematician found the exact means of squaring the circle — but having studied at the [Istituto] Politecnico of Milan, I don't believe it and know that for secula seculorum  we must content ourselves with the famous π — I had proposed an extremely simple π to square the situation with Leonardi — but if that mathematician has truly discovered the magic formula, do sent it to me, by all means! since perhaps it will work for our situation here.

My apologies for the lengthy chat — tell Puccini that I think it's necessary we meet together with you here in Milan — many doubts and other lingering questions are better clarified in person than in writing. Such an encounter could take place after the Maestro returns from Karlsbad, if this is convenient for you.

I have no plans to leave Milan.